We have good news and bad news about aging.

In the 27 countries surveyed by an Australian Think Tank, average life length has soared during the past 40 years from 67.7 to 78.2  years for someone born in 2015. You know the reasons. Medical technology and life style have both improved.

Yes, the numbers do depend on where you live: 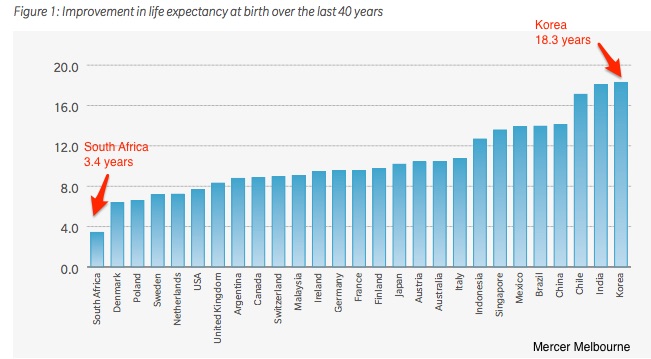 But still, many of us will be enjoying retirement for more than two decades: 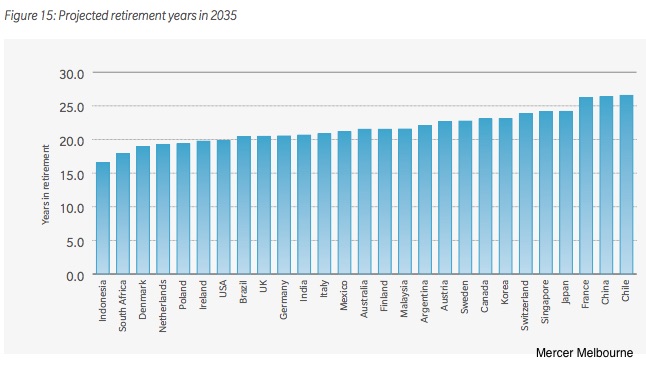 Imagine though the gargantuan task of supporting an increasingly large non-working population.

To see how well we are doing, the Australian Centre for Financial Studies at Monash University has been giving grades to countries during the past eight years. Their overall categories are adequacy, sustainability, and integrity. Broken down, those big criteria covered facts that ranged from taxes to regulation to demography.

In a color coded world map (below), the red countries are doing a much better job with retirement income systems than the blues and yellows. Denmark and the Netherlands were the only nations to get an “A.” At the other end, Argentina’s “D” was the lowest grade.

The U.S. retirement income system has a public and private dimension. The public side comes from the country’s Social Security System. In addition, many of us have employer funded pensions. Combining the public and private, Mercer Melbourne (the report also said Melbourne Mercer) gave the U.S. a score of 56.4 and a “C” grade. Reflecting mediocre performance in adequacy, sustainability and integrity, the system received suggestions that many politicians seem to be ignoring:

The best places to be old? Denmark and the Netherlands.

My sources and more: Melbourne Mercer remains an ideal source of facts for seeing how nations are coping with aging populations. For the U.S., Caring did a state-by-state survey and ranking solely from the senior citizen’s perspective.