When General Mills switched to an all natural Trix, the response was not quite what they expected. One mom said, “My kids find the color of the new Trix cereal quite depressing.” Another Trix lover complained, “It’s basically a salad now.”

This was the old Trix: 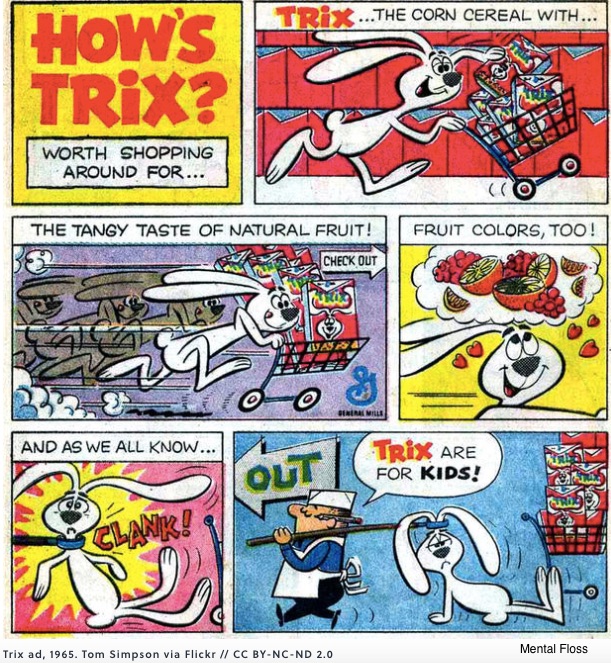 Where are we going? To how oligopolies like General Mills compete.

But first, more about Trix.

The Appeal of Old Trix

Wondering why we want our old Trix, I found Doritos had some answers.

We just need to think taste, texture, and memories.

As a sugary version of Kix with Orangey Orange, Raspberry Red and Lemony Yellow, Trix was introduced by General Mills in 1954:

As firms that enjoy economies of scale and dominate large markets, oligopolies like General Mills can compete through product differentiation. Their goal is the “stomach share” that Trix achieved through its flavor, crunch and color.

Now, instead of red 40 and other artificial dyes, the new Trix uses vegetable and fruit juices, turmeric and annatto extract and even radishes. The problem is that the fake stuff provided the taste, the texture and also the brand’s identity since 1954.

Utilizing the market power that places them far to the right along a competitive market structure scale, General Mills will soon have two Trix, a “classic” and a healthy version.

My sources and more: H/T to Now I Know for reminding me of junk food science. We first looked at junk food four years ago. Now we have more on Trix, Pringles, and a reprise of this fascinating NY Times Magazine article.