#TBT: Today we look back to when the U.S. economy was more productive.

The Golden Age of Productivity

During the 1940s, the McDonald brothers sold beef and pork sandwiches, ribs, and barbecue. They soon realized, though, that the more “we hammerd away at the barbecue business, the more hamburgers we sold . . . [and] my God the carhops were slow. We’d say to ourselves that there had to be a faster way.”

Closing their restaurant for three months in 1948, they redesigned its entire operation. Paper instead of china, custom-designed grills, and ten hamburgers to the pound would cut costs and optimize efficiency. Dick McDonald designed a portable, rotating tray on which two employees could dress hamburgers as it turned. A newly created ketchup squirter would dispense precisely the right amount each time with a single squeeze.

Not only would they serve a limited number of items (hamburgers and cheeseburgers; three soft drink flavors, milk, and coffee; chips; a slice of pie; the soon to be added fries and a shake), but also those items would be standardized. Every burger would have mustard and ketchup, onions, and two pickles. And they would charge only fifteen cents a burger, half the going rate.

Achieving a quantum leap in productivity, it took them 15 seconds to fill each order.

Because of more electrification, a better highway system, the suburbs, and we could add McDonald’s, we can look back fondly at the Golden Age of Productivity Growth from 1948 to 1973.

Below you can see two peaks in productivity growth. Economists consider the 1990s increase much less robust than its mid-century predecessor: 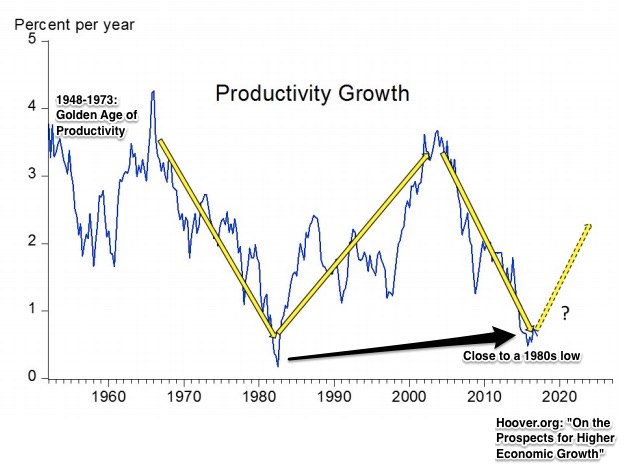 And now, many economists are concerned that recent productivity growth started to slow before the great recession (12/2007-6/2009):

Our Bottom Line: Our Standard of Living

Productivity growth elevates our standard of living. The CBO (Congressional Budget Office) suggests we can thank the mid-century productivity spurt for the following:

And remember the role of the ketchup squirter.

My sources and more: Liberty Street Economics (the NY Fed) and the CBO  are good starting points for pondering productivity growth. Alternatively, you could just read this NY Times article and Quartz to see simply the complexities of productivity.

Please note that several of today’s sentences on McDonald’s were from a previous econlife post. This post was slightly edited after publication.

The Development Debate About Chickens