The Development Debate About Chickens

You know the advice about teaching a man to fish rather than giving him a fish. Bill Gates has a similar idea but he suggests chickens.

Not everyone agrees though.

Bill Gates would like to see 30% of sub-Saharan Africa’s rural families get chickens. Given just five hens and a nearby rooster, they would have 40 chicks within three months. Easy to care for, the chickens could produce more chickens and eggs families could sell and feed to their children. Add empowered women (who care for the chickens) to these plusses and you have a relatively simple economic boost for rural families living on $2 a day.

We can start with the fallacy of composition–the idea that what works for one person might not for the group. You know. One person can escape through the exit during a movie but not everyone at the same time. One farmer can plant, sell more and get a higher price but not everyone.

Similarly, with chickens, can 30% of all rural sub-Saharan families raise and sell them? You really cannot count your chickens until they hatch (sorry) and here, there will be too many. As economists we know that means a shift in supply to the right and lower prices.

In addition, other livestock experiments indicate the cost benefit ratio is unfavorable. In one program, the families that were given livestock earned an extra $80 a year. However, the average cost for the animals was $1700. You see what that means for an ROI (return on investment).

Development experts have also tried offering people cash paired with business advice. In one Ugandan program, the women that were given a one-time $150 grant and training earned $202 more than a control group. Primarily for the education side of the initiative, the cost was $843 a household. And the cash was simple to disperse.

Moving away from the focus on the individual, other experts believe that economic growth is the key. Using India and China as an example, one Harvard economist explained during an EconTalk discussion that the delay from investing in economic growth is worth the payoff.

Our Bottom Line: The Tradeoffs

We have just touched the tip of the development iceberg. You can see the complexity of the debate. Hundreds of millions of people, multiple cultures, many solutions. It’s tough to know what kind of program will elevate Africa’s poorest families. It could be livestock gifts like chickens, it could be cash, it could be nothing now but lots later through economic growth.

We can just be sure that every alternative has tradeoffs. We also know that even more attention to specific cost benefit studies would be helpful.

So, let’s conclude with this wise tweet from a development expert: 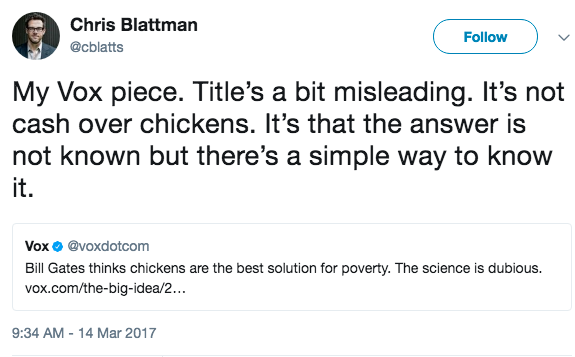 My sources and more: This Bill Gates letter expresses his chickens preference. Next we have the other side from Chris Blattman in an EconTalk podcast and at Vox. And then, for the economic growth perspective,  this EconTalk, discussion from a Harvard economist was excellent.