During May, the minimum hourly wage in St. Louis went up to $10.00. Yesterday it went back down.

Where are we going? To a slowdown in minimum wage momentum.

During November voters in four states supported a higher minimum wage. As a result, we had… 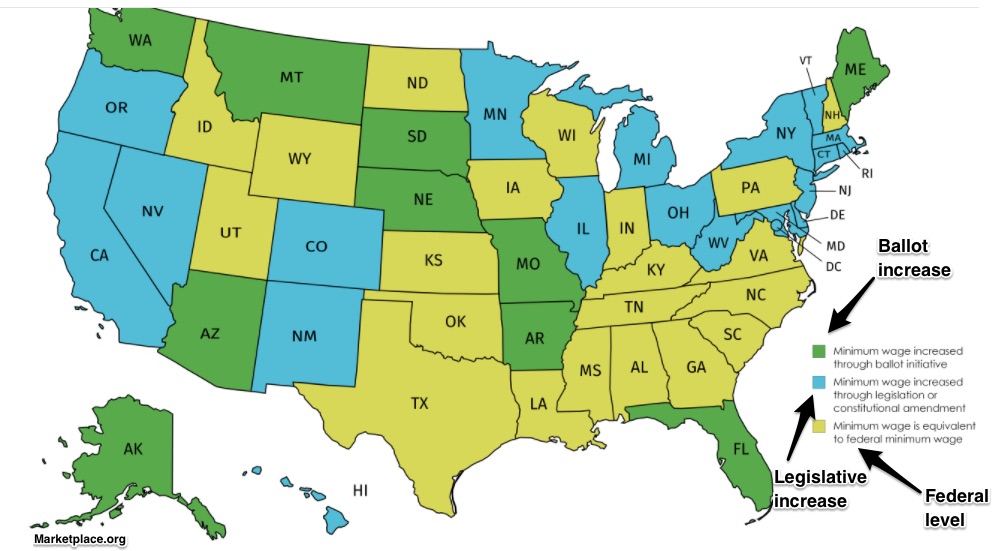 You can see that Seattle’s minimum wage is among the highest:: 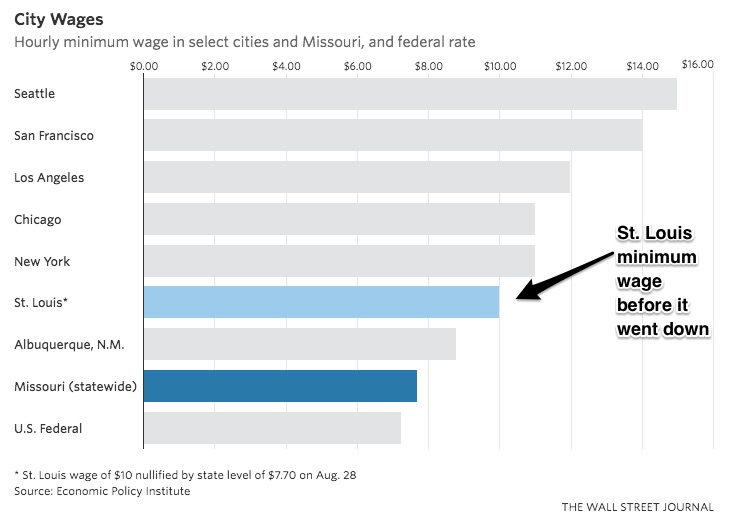 However, some analysts wonder if minimum wage momentum has reached its peak. Naming municipalities that have resisted and reversed the trend, their list includes a $10.10 to $7.25 minimum wage drop in Johnson County, Iowa. In Baltimore, Maryland we have the mayor refusing to implement a promised minimum wage hike. And parts of Cook County Illinois also said no.

The foremost example though is the St. Louis rollback. After the city went to a $10.00 minimum wage, the state said it had to return to $7.70. The reason was a state law prohibiting a minimum wage that exceeded the state’s $7.70. So yesterday, businesses got the go ahead to drop wages by $2.30 (if they wanted).

We could say that the minimum wage discussion in Baltimore summed up the debate. The mayor said that jobs will be lost because the minimum wage is above a market determined equilibrium price. She was convinced that businesses would flee to lower wage locations. Disagreeing, her opponents wanted to give low income workers a living wage and to diminish inequality.

At this point, many economists would use a price floor to explain it all. On a supply and demand graph, floors prevent price (wage) from moving down to equilibrium where it naturally gravitates. As a result, the floor creates unemployment because the quantity supplied of workers at a higher wage (QS) exceeds the quantity demanded (QD) for them from businesses:

Where does all of this lead us? Back to St. Louis and a never ending debate.

My sources and more: WSJ covers the lowered minimum wage landscape here and here. More of the same is at marketplace.org  but they say it all in a pretty good podcast.

How an Economic Statistic Created a Crime

Worrying About the Treasury's "X" Date