How an Economic Statistic Created a Crime

After acquitting its former statistics chief, the Greek court system just changed its mind. Now he faces a suspended two-year sentence for “violating” his duties.

Where are we going? To the Greek deficit.

Our story starts during 2010 when a former IMF official was brought in to overhaul the Greek statistics office. First, an initial revision inflated the deficit (the amount by which expenditures exceed revenue during one year) from 3.7 percent of GDP to 12.5 percent. Then though Andreas Georgiou took it further to a whopping 15.6 percent–a record eurozone level.

As you know, the impact on the country was calamitous. Georgiou’s revised deficit and GDP figures necessitated an unheard of discipline in order to secure the bailout loans it needed from the international community. Gargantuan government spending had to be cut, government employees fired, government pensions slashed. One woman who attended Georgiou’s trial said, “This man helped to destroy our country and ruin my family.” Like her, vast swaths of the population have lost their jobs and await their pension payments.

And it all still continues. According to Bloomberg, the Greek government has partially implemented 140 bailout requirements and still has more than 100 new reforms to go. The government knows it has to proceed. Otherwise it won’t get the next multi-billion dollar bailout that will cover its fiscal obligations.

Our Bottom Line:  The Greek Deficit

To assess the size of a deficit, we can start with an individual.

Assume that someone takes out a loan to cover $10 million in spending. When you learn that the net worth of the individual is $500 million, you stop worrying about the size of the loan. At 2% (10/500), her loan to net worth ratio is a very manageable.

Similarly we can look at deficit to GDP ratios to judge whether countries and other municipalities have borrowed beyond their means. 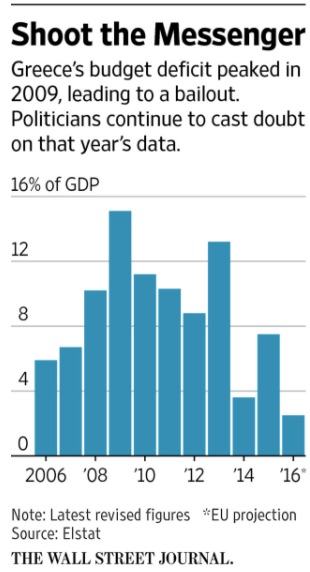 And in Greece, we wind up with a crime statistic.

My sources and more: The background on the Georgiou case comes from a previous econlife, Then, FT had the update and additional detail. And, for even more, I suggest Bloomberg and WSJ.

Please note that sections of today’s post were published in a past econlife.

Can a Hurricane Help an Economy?