Worrying About the Treasury’s “X” Date

October 2 could be the “X” date–the day when the U.S. cannot meet all of its financial obligations. It depends on whether the U.S Treasury can make an $81 billion Military Retirement Trust Fund payment. We will have the money if the Congress says it’s okay to borrow more by raising the debt ceiling.

Where are we going? To the debt ceiling and good credit.

We need to borrow because government spending exceeds its revenue. On the first of every month Medicare and soldiers’ checks go out and then on the third of the month, it’s Social Security. Together, that’s maybe $71 billion. In addition, the government pays for submarines and highway maintenance and the President’s salary. Meanwhile, you know about the Military Retirement Fund and still there is much more.

Since tax revenue does not cover spending, borrowing covers the shortfall.

So who has close to $20 trillion in government securities?

The rest of the U.S. debt is held by foreign governments, businesses and citizens. As of June, 2017, in a list of the 34 “Major Foreign Holders of Treasury Securities,” China was first, Japan, next and then Ireland, Brazil, and the Cayman Islands.

We have a debt ceiling because of a 1917 law. At the time, the Congress decided it was losing control of the volume of borrowing. To regain power over the federal purse and fiscal policy, they said, “We will decide the maximum amount the U.S. can borrow.” And since then, 84 times, they have raised the debt limit.

For some members of Congress, concern about the ceiling relates to a rising debt to GDP ratio: 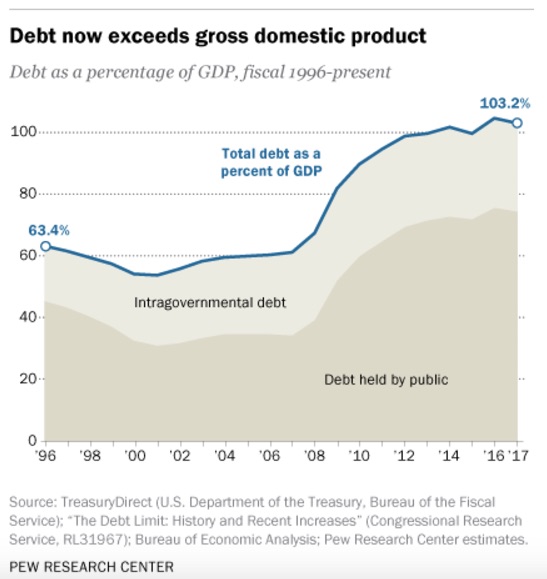 On July 28, Treasury Secretary Steven Mnuchin sent a letter to Speaker of the House Paul Ryan. The letter said the Treasury will soon have to suspend necessary borrowing. Recognizing the gravity of the situation, he concluded his letter with…

“Based upon our available information, I believe that it is critical that Congress act to increase the nation’s borrowing authority by September 29, 2017. I urge Congress to act promptly on this important matter.”

Our first Secretary of the Treasury Alexander Hamilton believed that a national debt, as long as it was manageable, was beneficial. Reading about his plan to fund and refinance the United States’ revolutionary war debt reveals his commitment to establishing our good credit. His approach was varied, including issuing new bonds to pay for those outstanding and servicing the interest promptly on the foreign debt.

It worked. Even those in Holland, then the financial capital of the world, displayed confidence in our public credit. Adhering to the Hamiltonian philosophy, the United States has never defaulted on its debt.

The U.S. has never ignored its “X” dates.

My sources and more: There are so many ways to look at the national debt. We can consider the current situation and see Steve Mnuchin’s letter. Then Pew and Brookings provided more insight and the CBO  analyzed the numbers. You can also check the current foreign holders of the debt.

Please note that this entry is an updated version of past notes on the debt ceiling.