The Smell Test That Some EU Cheese Makers Failed

We could say that Parmesan cheese makers didn’t pass the smell test for EU storage aid.

Where are we going? To how cheese makers responded to the Russian import ban.

After Russia reacted to Western sanctions with a cheese embargo, the EU offered some Private Storage Aid (PSA). Earmarking long lived hard cheeses, the aid targeted dairies that depended on Russia for their livelihood. Close to the top of their list were Finland and the Baltics.

It did not quite work out that way.

Explaining, the EU said they received a “disproportionate surge” from cheese makers who traditionally dealt minimally with Russia. They meant the Italians. While 7,202 tonnes of Italian cheese went to Russia in 2013, the Italians requested PSA for 84,120 tonnes. Asked about their participation, an Italian representative said that their hard cheeses were especially suitable for the program.

With the plan not quite working out as they expected, EU officials closed the storage aid option only three weeks and two days after it started.

Meanwhile, Russian cheese makers have been smiling. When cheaper, higher quality imports were eliminated, local dairies benefited. According to the NY Times, the goat cheese people at a 12-acre farm near Moscow swung from monthly losses of $5,000 to non-stop requests from restaurants and grocery stores. With volume, one dairy was able to specialize just  in mozzarella. Even PepsiCo is somewhat happy because it owns the largest dairy in Russia. (As a U.S. firm though, PepsiCo dairy products have faced negative Russian publicity.)

In so many ways, trade barriers wreak havoc with supply and demand.

On the European side, demand evaporated. But then government further distorted the market on the supply side with storage aid.

Meanwhile, in Russia, before the embargo began, domestic supply was overwhelmed by higher quality European cheeses. 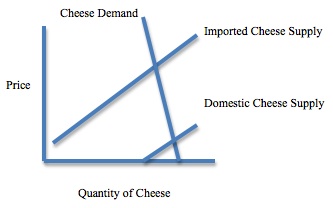 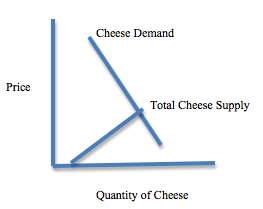 But within a year Russian cheese production blossomed. With no EU competition, price, quality and quantity all increased. 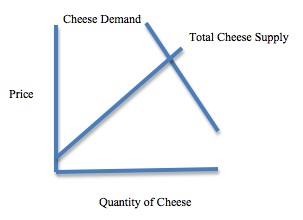 The Happiness Gap Between Parents and Non-Parents