The Happiness Gap Between Parents and Non-Parents

There are fewer child-free people in the U.S.

Looking at lifetime fertility, a Pew study tells us that more highly educated women are having children. Whereas in 1994, 30 percent of women with postgraduate degrees, 40-44 years old, had no children, now the the number has declined to 22 percent.

Overall too, we are seeing less childlessness. While the average number of children remains close to two, the proportion of women past childbearing years who are not mothers has decreased. For 1994 the number was 18 percent, in 2000, 20 percent, and then in 2014, it slipped to 15 percent.

Where are we going? On Mother’s Day, we should ask if having children makes you happier.

Economists who are interested in subjective well-being (SWB) have wondered who is happier, people with children or those who are child-free. In one study from Nobel Laureate Daniel Kahneman (psychologist who won the economics prize in 2002) and his associates, child care was topped only by email, housework, work and commuting as most dislikable among 16 activities.

Indicating how “happy, warm/friendly, enjoying myself” participants felt about the activities listed in this table, the scale in the Kahneman study was 0 (not at all) to 6 (very much). The numbers represent the average for all respondents. You can see “taking care of my children” near the bottom.

As always, though, your answers depend on your questions. Similar to the Kahneman results, studies that focused on the average parenting experience in the U.S. and beyond concluded that parents were less happy than non-parents. 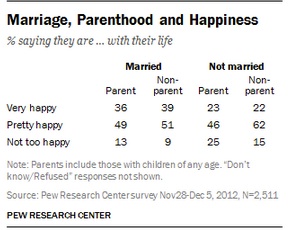 However, when the researchers looked at different age groups, the results changed. If we imagine a happiness trajectory for parents, it is relatively constant. For non-parents it goes down. As a result, while young parents may be less happy than non-parents, the later in life you look, the smaller the gap. One hypothesis suggested that children provide a cushion that helps older adults cope with an increasingly impersonal society.

Our Bottom Line: Subjective Well Being

I suspect it is tough to assess what economists call subjective well-being (SWB). For parenting, the closer we look the more we see an unending list of variables.  We could ask moms or dads, single or married parents, working or stay-at-home moms. The day of the week could vary as could income.

Or we could ask moms and non-moms their SWB on Mother’s Day.

The Smell Test That Some EU Cheese Makers Failed