How to Squeeze More Seats on a Plane

An airline seat is really all about cost and pitch.

Defined by SEATGURU, “Seat Pitch is the distance from any point on one seat to the exact same point on the seat in front or behind it.” On short haul flights, the pitch could be as little as 28 inches while 31 or 32 inches seem to be typical for longer trips. Airlines have to reduce pitch to wedge in extra seats.

A pitch can be shrunk by reducing a seat’s recline from, for example, 3 inches to 2. Or a “pre-recline” could be installed that one airline said passengers like because the person in front stays in the same position. Meanwhile, though, to make the smaller pitch feasible, seat cushions have to get thinner. Also, the magazine pouch that had been attached to the back of a seat can be relocated to a higher position.

Using new “slim-line” seats with less pitch have enabled Southwest to add another row to its 737-700s. Just one additional row–6 seats–generates an extra $200 million in revenue annually if the 143 seats on the plane are consistently occupied. 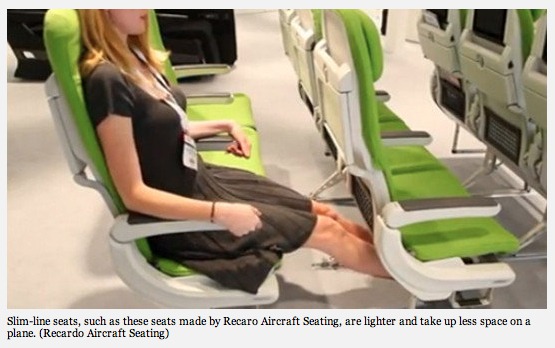 Assume for a moment totally unrealistically that flying a 737-700 from New York to California costs Southwest $137. Most people would look at the average cost per passenger to see the airline’s expense. That would take us to $1 on a plane with 137 seats. ($137/137 seats).

Instead, economists like to tell us that rational people think at the margin. Most decisions involve a little more or a little less of something. Deciding whether to drive 60 or 70 MPH on Route 287 this evening, I was thinking at the margin.

Airlines are always thinking at the margin. Whether that Southwest plane has 37 passengers or 137, it will cost the airline that hypothetical $137 to fly cross country. You see where this is going. Each extra passenger costs the price of a meal or maybe just a soda and some pretzels. With an extra row of 6 seats, marginal revenue (fare and fees) far exceeds the minuscule marginal cost.

Sources and Resources: For the most fascinating description of Southwest’s cost savings on its planes, I recommend a blog from the Airline Passenger Experience Association. Having never heard of the group, I was able to confirm their information in a NY Times article and at SEATGURU. Contrasting airline industry comments, the LA Times quoted Senator John McCain after a flight between Phoenix and Washington, DC, “Are you as frustrated as I am that the airlines keep moving the rows of seats closer and closer together?” They also said that in a recent survey, the vast majority of passengers did not like slim-line seats. Finally, if you want even more seat facts, econlife looked at the size and configuration of business class seats.