We can have black swans, gray rhinos, elephants, and camels in the room.

Nassim Taleb was working on Wall Street when he wrote a book about Black Swan Events (2007). As he explained, philosophers had always told us that a black swan event was an exception. But Taleb gave us a more precise three-part definition:

Examples of black swans range from the severity of the Great Recession (December 2007-June 2009) to the spread of the internet. (Taleb tells us that the Covid-19 pandemic was not a black swan.)

Michele Wucker says she first described her gray rhino metaphor at the World Economic Forum in Davos during 2013. Asked to talk about the “weak signals” that precede crises, she decided the problem, instead, was “weak responses.” Understanding what she meant, we can start by imagining a massive (imaginary) creature that is heading toward us. Although we know it is there, we give it little notice. It reminds us that sometimes we could have done something about a high impact threat. But we chose not to.

In the beginniong of her 2014 book, Wucker refers to pedestrian deaths in New York City that might have been avoided with more effective regulation. On a global basis, climate change is the example most cited. (Knowing that a viral pandemic was a well-known threat, Covid also belongs here.)

Here, I would like to add to our zoo population.

Our fourth animal friend is the camel that has his nose in the tent. As one fable tells us, the night was cold and the camel asked his master if he could just warm his head in the tent. Soon after, when he asks if he can bring in his neck, his front legs and then, his whole body, he stands and crowds out the master. 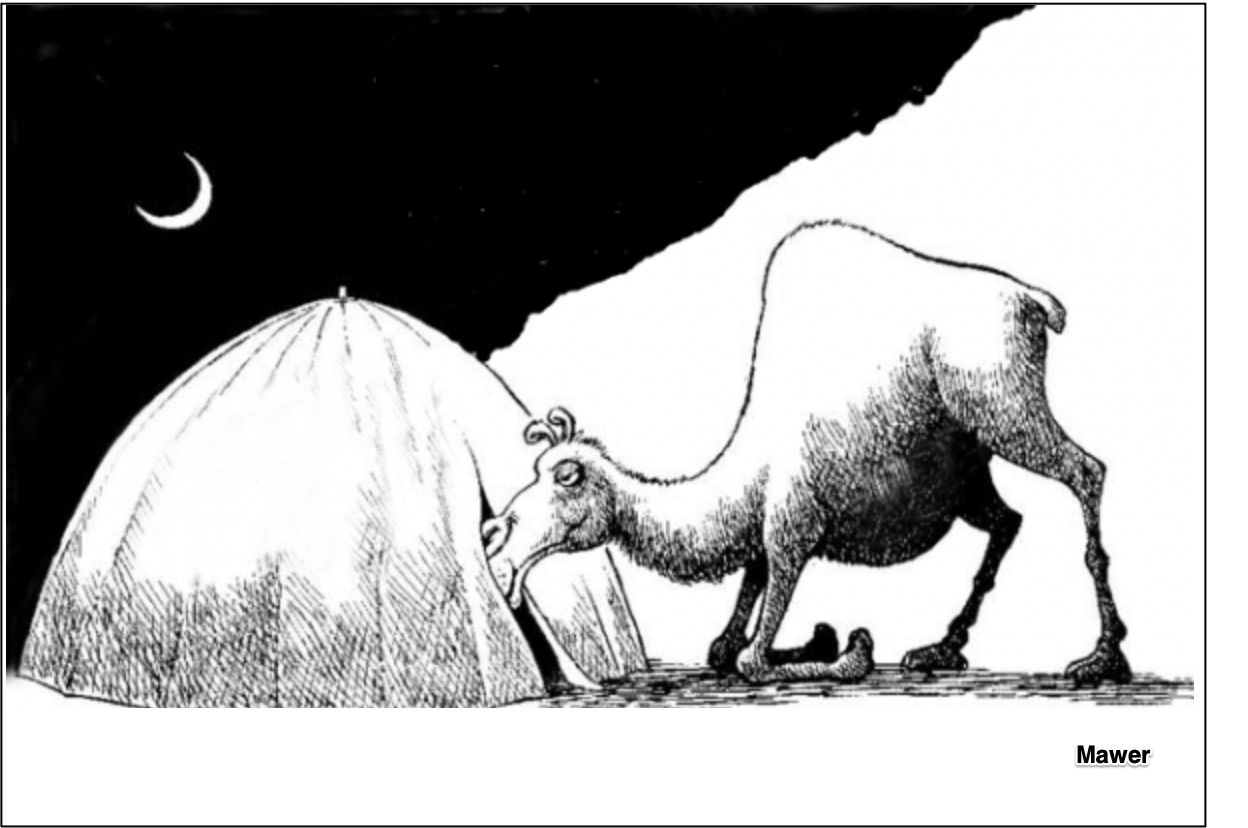 One example is working at home during Covid. Now, some of us think we need not always be in the office.

Behavioral economics provides the one thread that ties together our animal metaphors. Starting with explanations from Nobel Laureates Daniel Kahneman (2002) and Richard Thaler (2017), we can explore why it is more likely that we will behave as a human (irrationally) rather than an econ (predictably, logically, and rationally). They explained why defaults and nudges get us to plan for a future that we typcially ignore. They display the positive and negative role of incentives in our lives.

Through their research, we can better understand our reaction to black swans and our tendency to ionore those gray rhinos, the elephants in the room, and those camels that crowd us out.

And finally, I would like to ask where, in our zoo, we should place (unexisting) cryptocurrency regulation?

My sources and more: In a past econlife (that I quote today), my black swan information came from this Nassim Taleb book.and his econtalk interview. For Michele Wucker’s gray rhinos, I suggest the introduction to her book on Amazon, this Matt Klein conversation with her, and this one too. Then, this website told more about the fable of the camel in the tent. Finally, as in the past, I recommend Nudge (Thaler and Sunstein) and Thinking Fast and Slow (Kahneman) as superb introductions to behavioral economics.