Why a Heat Wave Name Would Help

As a result, I would have expected long lines at ice cream stores. But no, it was so hot that no one wanted to go out. Instead, a Houston ice cream store owner reported that her home deliveries were way up–especially for strawberry daiquiri cones and milkshakes.

With recent temperatures (Fahrenheit) touching 104° in Madrid, 109° in Nevada, and a red alert in China signaling temperatures could touch 104° in 84 cities, we have begun to recognize that we have a problem.

Comparing the 1980s to the 2010s, there were twice as many days from May to September with heat waves in North America.

Miami, Dade County and Phoenix, Arizona have responded by appointing a Chief Heat Officer while last November, Los Angeles created a similar position. In each city, the basic goal is to identify the most vulnerable residents and alert city agencies how to mitigate the impact of heat. In addition, like hurricanes and air quality, California will use a statewide ranking system for extreme heat. 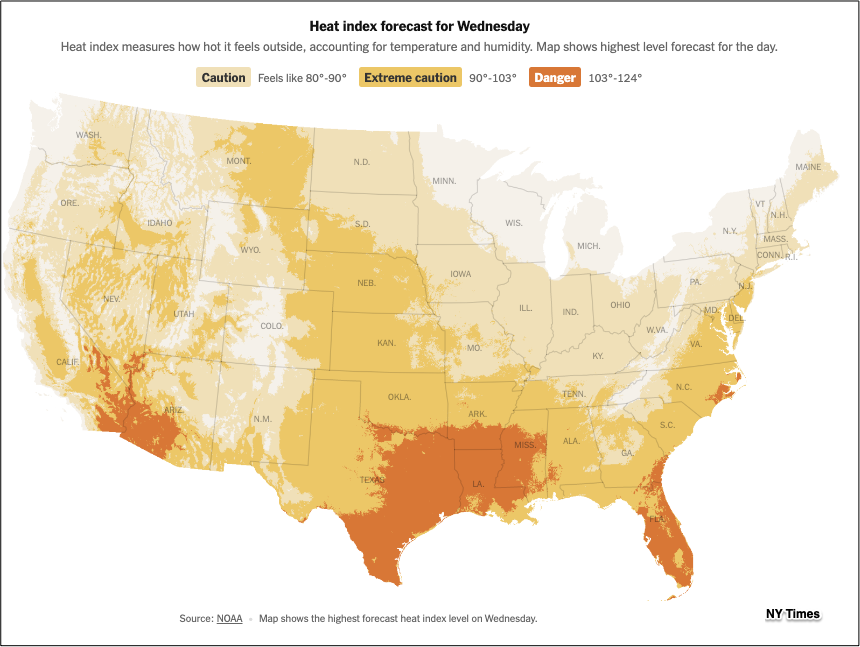 CHOs are asking cities, already with limited budgets, to plan for future heat waves. However, their big challenge could be the opportunity cost of new programs. With Katrina the perfect example, we only cared about a Category 5 hurricane after it hit. Beforehand, we refused to allocate municipal spending to the preparation that would have reduced the damage.

Actually though, it all made sense.

Defined as the sacrificed alternative, the opportunity cost was too great. It was more logical to have lower taxes or spend the money on schools and other current needs. So now we can ask if we are sufficiently concerned. Perhaps, because we “treasure what we measure,” communities that focus on heat can get more done.

Like hurricanes, heat wave names would make them more memorable. And, there is little opportunity cost to naming a heat wave. Suggestions?

My sources and more: Listening to a Tim Harford podcast reminded me it was time to return to extreme heat. From there, FT and NBC News had the update as did The Washington Post, here and here, CNN, and the NY Times. (Please note that parts of Our Bottom Line was in a previous econlife post.)

When Measuring Mixups Are More Than Mishaps