Why Starbucks Is Raising Prices

He could have been talking about a Chattanooga, Tennessee Starbucks that ran out of  Venti cups. They had the coffee, but not the containers. Like so many other items, the cups, many from China, are stuck in a port. Or, if they depended on a U.S. paper mill, then a worker shortage could have been the reason. And, to that, we can add the difficulty of getting Texas resin coatings for paper cups that was caused by their unusually cold weather last year.

During that Starbucks earnings call, the bottom line was more price increases. Let’s take a look at why.

For starters, think plastic. At Starbucks, the stirrers and (green) stoppers, the utensils, cups, and lids all need plastic.  According to WSJ, the cost of plastic packaging products has popped 24 percent from last year.

The Visual Capitalist showed us the costs behind our cup of coffee. As the first four stages move from growing and exporting to roasting and distribution, coffee producers spent close to $.62 in 2020. Then, for the retail stage we could add $2.17 to behind the scenes expenses: 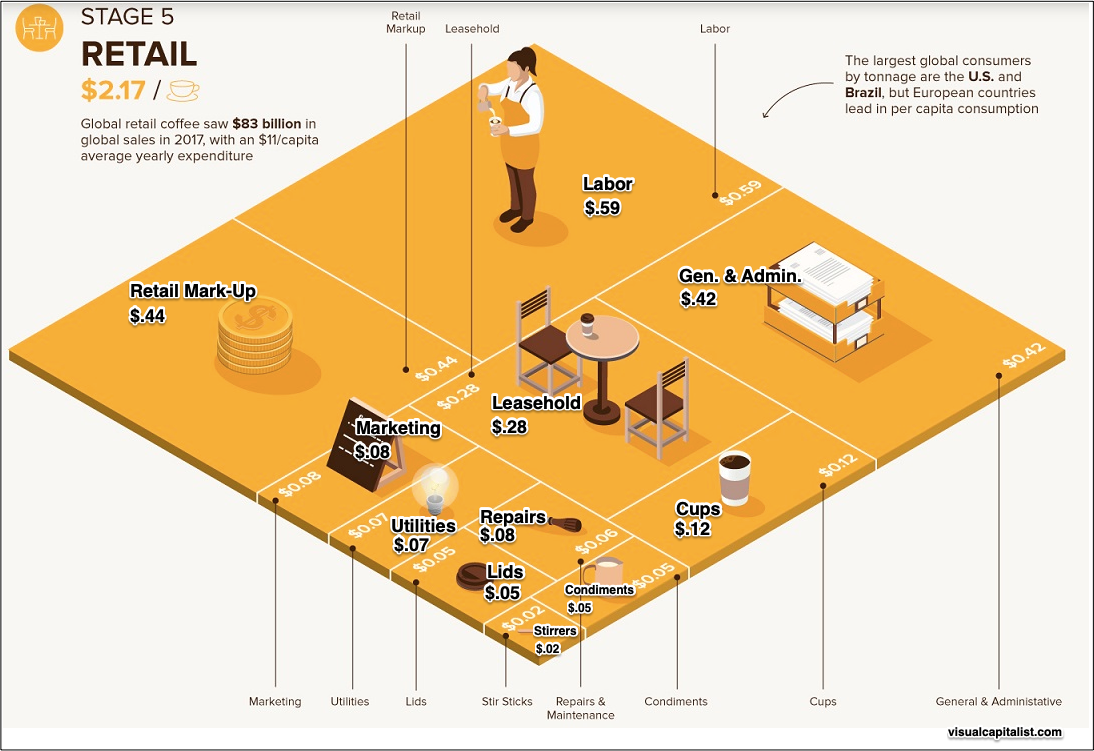 The (estimated) retail price result for a 16 oz. cup is $2.80. Now, we know that, based on the chain’s size and recent inflation, these numbers are surely different for Starbucks. However, they show us the proportions. We can see that cups and lids are relatively inexpensive. And with the pay hike Starbucks announced last October, their labor expense will increase to a range of $15 to $23 an hour for baristas by the summer.

Leaping from the production side to consumption, today let’s just look at whose GDP includes the most on coffee in its Consumption Expenditures component. On an approximate per person basis, in a 2020 report, Finland is at the top:

My sources and more: Thanks to WSJ, here and here,  for alerting me to Starbucks’ supply disruptions. Meanwhile, Motley Fool had more detail on their rising costs. However, do go to the Visual Capitalist for the cost insight. Also, I used World Atlas for my coffee consumption statistics. (Do note that Statista placed the Netherlands at the top.)

Why the SEC Will Look For Carbon Footprints