How to Decide if a Hot Dog Is a Sandwich

When Stephen Colbert interviewed Ruth Bader Ginsburg, he asked her if a hot dog was a sandwich. The Washington Post told us what followed:

Perhaps more than he might have realized, Stephen Colbert took us beyond a frivolous question to taxes, competition, and “The Cube Rule.”

Definition of a Sandwich

According to New York State, a sandwich can be, “as simple as a buttered bagel or roll, or as elaborate as a six-foot, toasted submarine sandwich…” When you separately buy some bologna, cheese, and bread, these items are not taxable. But if they are combined as the sandwich that you purchase, then you pay a tax. Similarly, in a New York State deli, if you order an uncut bagel and a side of cream cheese there is no tax. But if the cream cheese is on the bagel, it is a sandwich and taxable.

So, does all of this mean that a hot dog is a sandwich? Joining a list that includes wraps and gyros, the answer is yes. The NYS sandwich tax applies to hot dogs:

In 2006, a court proclaimed that a burrito was not a sandwich. At the time, Panera’s contract said that no other establishment could sell sandwiches at the mall where it was located. When the food court subcontracted to a burrito chain, citing its deal and the potential for competition, Panera protested. They lost the case because of the definition of a sandwich.

Perhaps we have a solution.

Clarifying sandwich classification, the Cube Rule tells us that there are six categories for foods with “starch.” Where a food belongs depends on where the “starch” is placed. If it is just under the food, then it’s “toast.” (So pizza is toast.) On the top and the bottom? A sandwich. At a right angle? A taco. (Starches not included in the list like spaghetti are “salads.”) 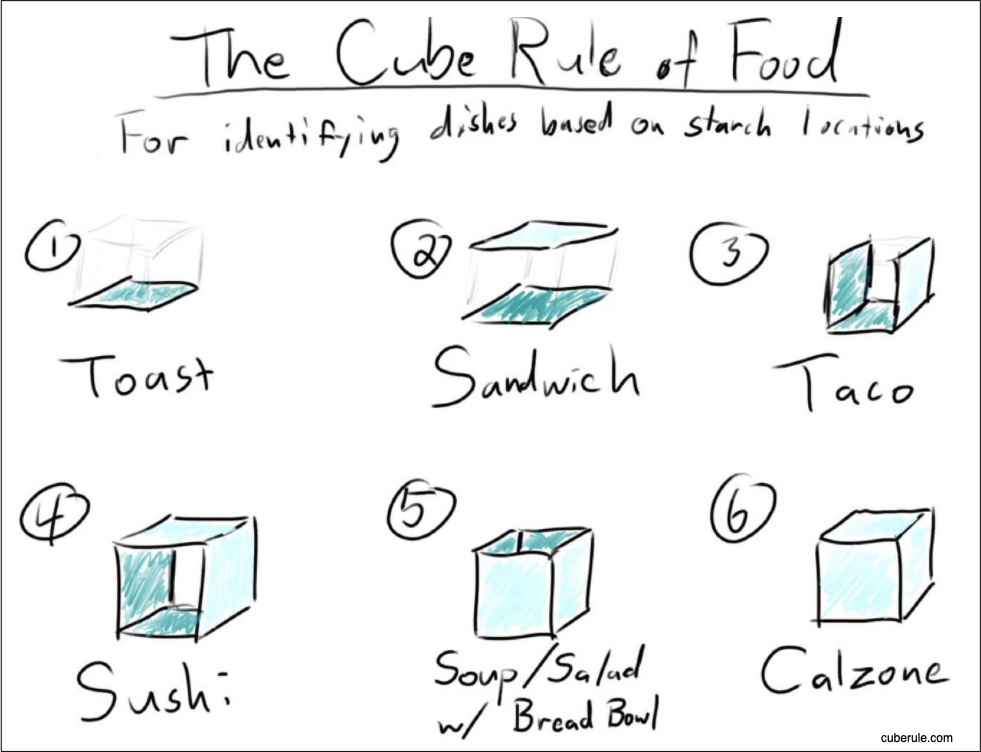 You can see that a hot dog is NOT a sandwich. It is a taco.

My sources and more: Isn’t this rather surreal? The Cube Rule was like Eugene Ionesco’s children’s book, Number 2. The book is wonderful. I do recommend it. However, returning to today’s post, I learned about the Cube Rule from my Hustle newsletter. From there, I returned to our 2017 post and also discovered a Washington Post article that opened other possibilities. And finally, when this NYC tax website explains why a bagel and the hot dog are taxable, it is riveting (really).