In 2009, Ruth Bader Ginsburg explained to ABC news why the Supreme Court needed more women. And no, it was not just because she was the only female after Sandra Day O’Connor departed. It had to do with understanding other people because of your own personal experience.

Suggesting that a woman can bring a different perspective, Justice Ginsburg spoke about a 13-year old girl who had been strip searched by school personnel looking for drugs. Ginsburg believed her colleagues had not grasped the depth of the young teenager’s embarrassment. For a wise decision, they needed to see what Ginsburg saw.

Let’s take a bit of a leap today from female Supreme Court Justices to female movie critics. The ideas are the same.

Like many of us, I typically take a look at Rotten Tomatoes before selecting a movie. Now though I suggest we recognize that the critics are mostly white men. And that could make a difference.

If you remember just one statistic from a new UC Annenberg report, it is 77.8%. Almost four-fifths of all the film reviews in their study were written by men. Just 22.2% were from women.

The report was based on 19,559 reviews and more than 1600 critics. The films were the top-grossing 100 from 2017. While the study also considered diversity through underrepresented males and females, our focus will be the male female divide.

You can see below that even when we eliminate the men and women who are underrepresented from the totals, still we wind up with a white male dominance. We see, for example, that 63.9% of all film reviews were written by white men: 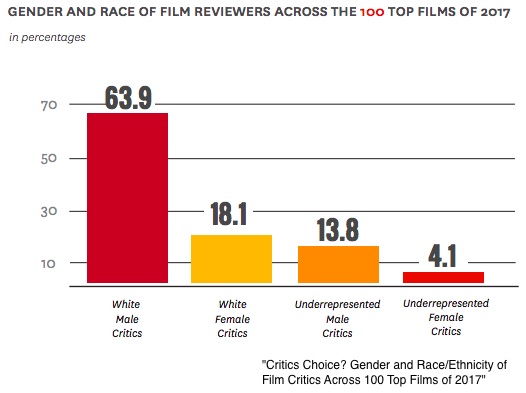 Somewhat similarly, if we focus on the study’s (approximately) 1600 critics, then the white men total slightly more than half:

While these statistics vastly simplify a 22 page report, they do reflect the authors’ facts and their message. As you can see, the facts show skewed representation. Consequently, they convey the concern that our film critics’ worldview may not be shared by a much more diverse movie audience.

When we look at movie reviews, as economists, we can think of human capital. Defined as the knowledge we accumulate, human capital is influenced by our experience. As a result, the wisdom a critic brings to a film review can depend on gender…

Just like Justice Ginsburg said about the Supreme Court.

My sources and more: This ABC interview provides just a brief look at Justice Ginsburg’s outlook. But, it was a perfect springboard for discussing this UC Davis paper from Stacy Smith and her colleagues. Finally, for a third example of female underrepresentation, econlife looked at female CEOs.

How We Got Cheesier Pizza