Why We Want to Drive in Circles

For road re-design, xkcd has some unlikely possibilities:

Instead, we can look at Carmel, Indiana.

Carmel has been building roundabouts. In 2010, the International Roundabout Society gave the city its highest honor. (The mayor said the society was composed of “three guys in a pub.” The NY Times says the number is six.)

In fact, one of Carmel’s roundabouts was named the “International Roundabout of the Year.” Now Carmel has 140.

The big reason for a roundabout is safety. The Federal Highway Administration tells us that roundabouts eliminate head-on and right angle collisions. Maybe mainly because because they require slowing down, fatalities have dropped by 90 percent, injuries by 76 percent, and all crashes by 35 percent. (Although these facts are old and problematic in many ways, still their message is right.)

Please look at the red dots. Roundabouts have so many fewer vehicle conflict points: 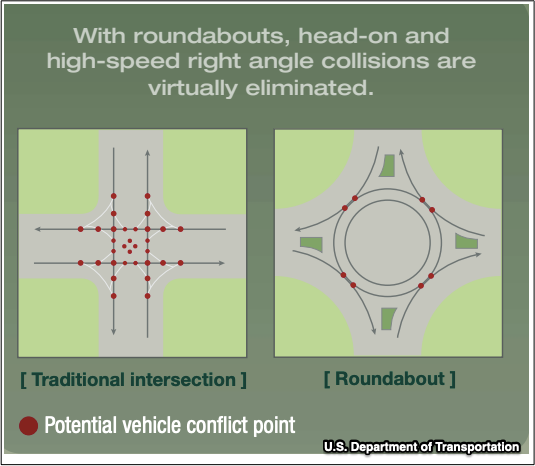 In addition, roundabouts reduce the need for traffic lights, they diminish pollution, and they save money. Since the circle takes care of the right of way, you don’t need a traffic light. Consequently, less tech decreases spending as will fewer accidents. Then, to these benefits, we can add less pollution as cars avoid stop and go and idling.

The key though is to depend on road design rather than people. As a behavioral economist might say, the design creates the “choice architecture.” At work you could be told that saving part of your paycheck is the default. On a tax form, we might automatically be able to deduct expenses. Similarly, when selecting a mortgage, one kind is the easiest to choose. In the same way, roads can shape our choices. The design of a roundabout forces drivers, walkers, and bikers to make safe decisions.

My sources and more: Roundabouts are one of my favorite topics. In Nantucket–the island without traffic lights–we have them. Then, yesterday, the NY Times reported that Carmel, Indiana favors them. I also recommend taking a look at how Sweden has handled road safety at WSJ and Quartz. Correspondingly, the U.S. Department of Transportation wrote about roundabouts here and here.

But finally, as did I, you might want to see that status of global road safety.from the WHO: 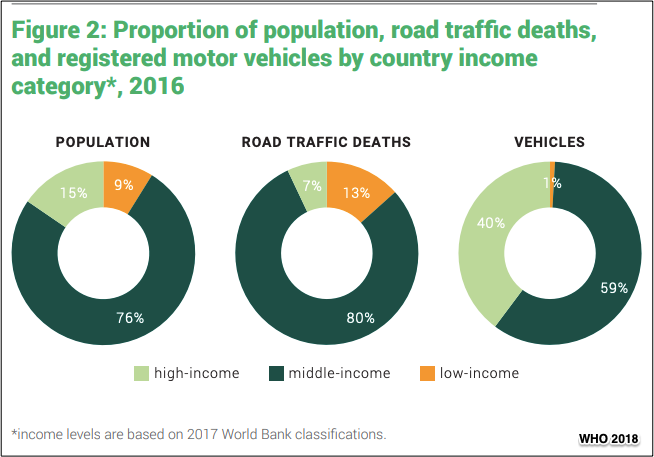 It’s the middle income nations that have the most fatalities.

When a Cryptocurrency Almost Bought the Constitution