How Broadway Shows Catch a Cost Disease
At $1.8 billion for the 2018-2019 season, the Lion King’s gross revenue was a record setter.
Somewhat similarly, before Covid, all Broadway revenue was climbing: 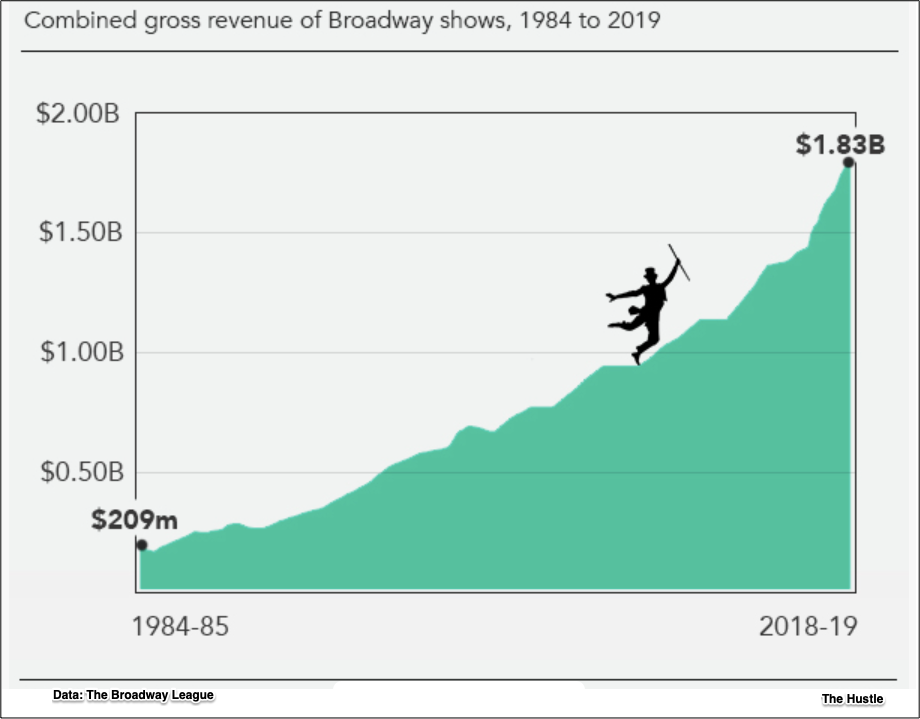 But a graph can be misleading.

Whereas the combined revenue of all Broadway shows (with Broadway defined at theaters with 500 seats or more) steadily ascended, the finances of most individual productions were not as rosy. Barron’s tells us that just one third of all shows “recoup their costs.” Even worse for new Broadway musicals, between 1994 and 2014, 21 percent made money for their investors. So yes, an investor in Phantom of the Opera walked off after 30 years with a $15 million profit. However, Spiderman: Turn Off the Dark lost $60 million.

As for what the money is used for, we have a production budget and a weekly operating budget. Coming first, the production budget covers creative fees to all of the designers, costumes, lighting,  We have the artists’ salaries and the auditions. rehearsal expenses and stage crew. Playwrights, composers, choreographers get advances. Then, once the show opens, salaries are a huge chunk of the expense. Weekly, actors, stage managers, caterers, managers, car services are paid. But also we can add advertising as a big ticket item and the theater’s cleaners, box office, stagehands. According to a 2016 estimate, a lavish musical can run $750,000 a week.

A lot of the money goes directly to people…and that is the problem.

The theater is labor intensive.

Please think of an 18th century Mozart string quartet. Neither today’s theater nor yesterday’s string quartet can enjoy economies of scale. We have the same number of people and the same array of costs. We have the actors, the costume designers, the writers, the musicians. As economist William Baumol explained, it is tough to enjoy the benefits of economies of scale when your production is labor intensive. And yet, because of those economies, when wages rise elsewhere, they nudge up what workers everywhere are paid.

As labor intensive sectors of the economy, education, healthcare, and the arts suffer from Baumol’s Cost Disease. They “catch” the higher wage from other industries that can afford it through their productivity.

My sources and more: Thanks to “The Hustle” for the Broadway facts. Then, for more of the numbers, Barron’s and the New Musical Theater, here and here, came in handy as did this study. Meanwhile, for Baumol’s cost disease, do take a look at this article from the Booth School and this one from Vox.