When a Cryptocurrency Almost Bought the Constitution

The CEO of an investment group purchased a first printing of the U.S. Constitution.

The amount and the circumstances made the transaction rather unusual.

At a Sotheby’s Auction, the U.S. Constitution sold for $43.2 million to Ken Griffin, CEO of the Citadel Investment Group. One of 13 extant copies, the Constitution was originally given to Constitutional Convention delegates and members of the Continental Congress in 1787. There were 500 copies of that first printing.

If we fast forward 234 years, institutions now own 11, two are in private hands, and one of them was for sale. There were two main bidders.

The first is ConstitutionDAO. Like me, you might not have known that a DAO (Decentralized Autonomous Organization) is like a collective. Composed of many individuals, the DAO uses Blockchain contracts to coordinate a project. Together the collective owns the project and manages its assets. Rather mind boggling, the ConstitutionDAO group crowdfunded more than $40 million in less than a week. Numbering 17,437, the group’s members each provided the digital money–the Ether– and the fees for the funds’ transfer.

They surpassed $40 million by November 18: 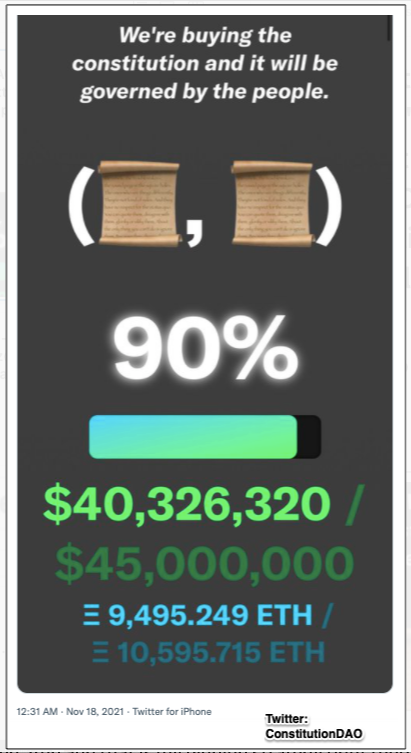 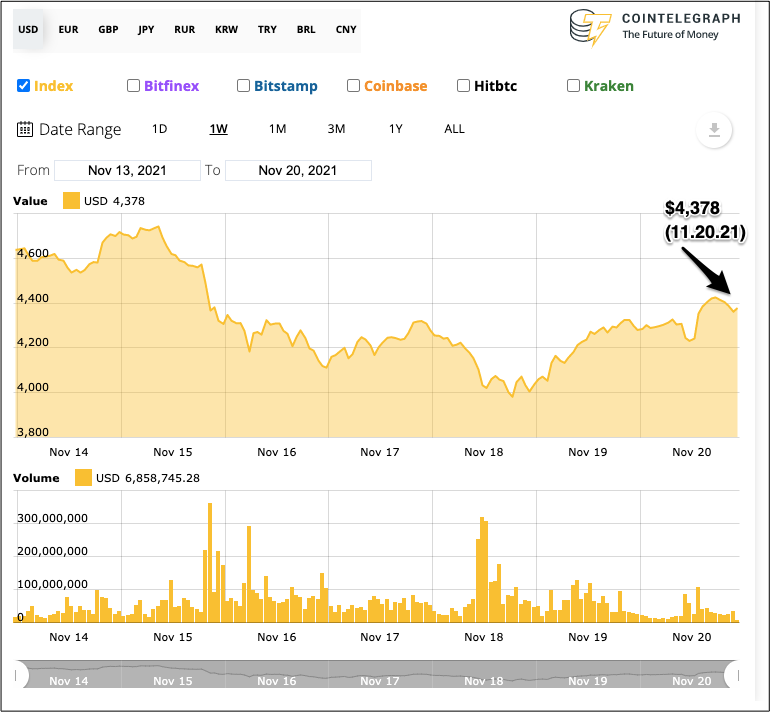 Surely aware of the $40 million raised by ConstitutionDAO, billionaire hedge fund investor Ken Griffin was the other bidder. ConstitutionDAO made it somewhat easy for Mr. Griffin. Usually, during a Sotheby’s auction, information is asymmetric. Bidders know their bids but not what their competition is willing and able to offer. For the Constitution auction, Mr. Griffin had all he needed to know. He just had to top ConstitutionDAO’s $40 million.

Financial intermediaries pair those who have money with the individuals and groups that need it. Because it has savings and makes loans, a bank is a financial intermediary as are stock and bond markets and even insurance companies. Now, from the crypto world, we can add cryptocurrency exchanges, electronic wallet providers, and bank-like entities that include BlockFi and Kraken Bank. In addition, as we have seen at econlife, there are the central banks that offer digital currencies.

Finally, we can say that ConstitutionDAO is a financial intermediary. After all, in less than 72 hours, it gathered $40 million from the savings side and then sought to invest it all.

My sources and more: Thanks to Slate Money for introducing me to the details of the Constitution transaction. From there, Smithsonian had more detail as did NPR.  Then, Sotheby’s told us much more about the auction.  And, for cryptocurrencies, Cointelegraph, techcrunch,  and this paper came in handy. So too did the NY Times.

Our Weekly Economic News Roundup: From Toys to Tesla

Why We Want to Drive in Circles