How Can You Cut $3.5 Trillion That Will Build Back Better?

There is a big difference between a million and billion. It takes 12 days to count a million seconds while we need 31.7 years for a billion. As for a trillion seconds, we are talking about 31,709.8 years.

Where are we going? To the Biden budget debate.

When we are told that a $3.5 trillion budget plan needs to get cut by a trillion or more, it’s helpful to know what we are talking about. The NY Times suggests that we use a “scaled down” budget. To help us grasp the huge numbers, they said the $4.174 trillion in projected government revenue for 2022 would be equal to hypothetical family income of $100,000. Using the same scaled down proportions, we wind up with this “family” spending $28,654 on Social Security and $18,112 on defense. Below, they present more of the family budget:

These are just a few of the numbers from a long list of programs. For example, cutting $450 billion for children is like going down $10,714 out of $84,000 in proposed spending: 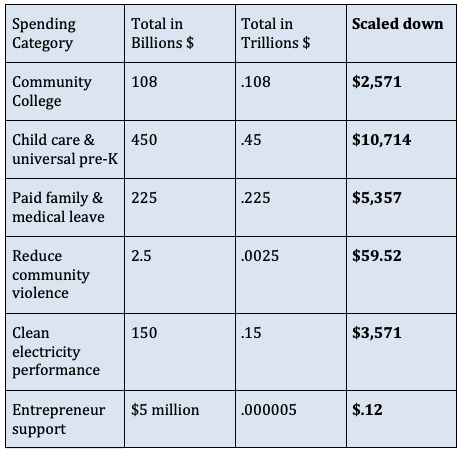 Getting a better grasp of what a billion dollar reduction means just begins to help us follow the debate surrounding President Biden’s spending proposals. Next, as economists we would have to ask about the tradeoffs. However, even those tradeoffs take us to a myriad of choices. They could relate to keeping a whole program and losing another. But also, by shrinking everything, we can keep it all. Another alternative is changing the time period since many of the proposals have a ten year window.

Each approach has its own costs and benefits. But they all involve the tradeoffs of thinking at the margin.

In a paper on information architecture, scholars looked at retirement savings. When people were told that they could wind up with $5,000 a month or a total of $1 million, their saving behavior differed. Actually though, both were roughly equal since $1 million had a (typical annuity) return of $5,000 a month. However, what they were told–the information architecture–shaped their behavior.

Similarly, as voters, most of us are just not sure how trillions relate to billions and millions. However, through a scaled down version, maybe the architecture is more rational.

My sources and more: This recent NY Times article, WSJ, and this older letter are good starting points for understanding big numbers. Then, for details about the Biden programs, you could go to the NY Times,  CBS News and The Washington Post.  And, for more on information architecture, this paper has the discussion.

But finally, you might just enjoy (as did I) this classic video of large numbers:

Also, please note that “Our Bottom Line” was in a past econlife post on big numbers.

The Educational Journey of a Homeless Child