Deciding if the Federal Government Should Borrow or Tax

Because of the pandemic and a decaying infrastructure and aging and pricey healthcare, recent federal spending is way beyond $4 trillion. Since revenue has been far less, we have to decide how to make up the difference.

We can choose between borrowing and taxes.

World War II was the last time the federal debt was so large. At $235.2 billion in 1945, the amount was much less than today’s $27 trillion. But we can compare them. Just like your income helps you decide if your mortgage is excessive, we use the GDP to judge if borrowing has grown too much.

Or, you might just want to imagine the federal debt as 26,950 dots–with each representing $1 billion:

So yes, we can decide how much to borrow by asking if the money will be used for investment that helps future generations. If the loans (bonds) are used for healthcare, then no, don’t borrow because its benefit is current. But, making the future better, research or roads are investments that we could fund by selling bonds. Moreover, historically low interest rates make borrowing unusually attractive.

Still, we certainly have to worry about the debt we pass down to our kids. One alternative is more taxes.

In a recent report on income distribution, the CBO (Congressional Budget Office) told us that from 1979 to 2018, tax rates dipped for the lowest income quintile while they fluctuated for the top earners:

Looking more closely, below, you can see that the income tax is where the affluent have higher rates than lower income quintiles:

As for tax revenue, the vast proportion–rising from 55 to 70 percent between 1979 and 2018–comes from the top quintile:

Defined as the next best alternative, the opportunity cost of a decision is the sacrificed alternative. When you choose, you refuse.  You might want to come to your own decision about the taxes and borrowing choice by filling in this table: 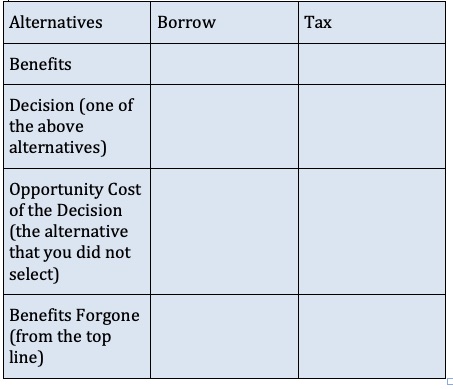 My sources and more: Thanks to the Conversable Economist for alerting me to the CBO report on income distribution and federal taxation. Then, to complete the puzzle, David Wessel at Brookings added several pieces as did a past econlife. Please note also that I did not add spending less as the third alternative because today was just about borrowing and taxes.

The Economic Side of Afghanistan

What People Will Pay For a Dorito