The Economic Side of Afghanistan

A political lens has dominated our image of Afghanistan. Wondering about the economic side, I wound up with two numbers, 146 and 173.

The first takes us to the 2021 Index of Economic Freedom and the second, Doing Business.

Among the 178 countries ranked in the 2021 Index of Economic Freedom, Afghanistan, at #146, is called “Mostly Unfree.” With scoring based on Rule of Law, Government Size, Regulatory Efficiency, and Open Markets, Afghanistan is near the bottom. Because Afghanistan got the highest score for its fiscal health. I assume the reason is the minimal amount that government taxes, spends, and borrows. The fiscal score belies massive government inadequacies and takes us to all other numbers that range from mediocre to dismal.

Their financial system is underdeveloped, their labor force is unskilled, and financial freedom is minimal. Below, I’ve copied the numbers. The scale is 1-100: 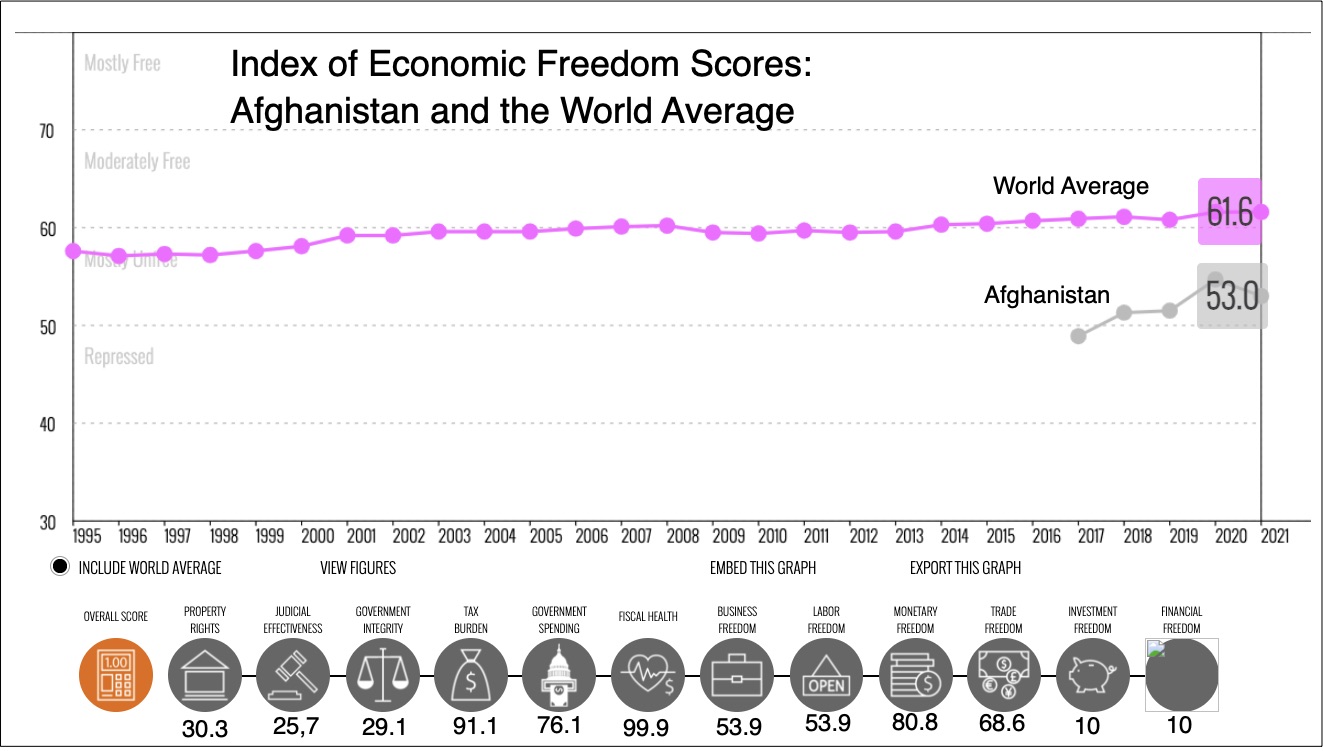 Correspondingly, Afghanistan’s #176 Doing Business rank also places them near the bottom of a 190 country list. Afghanistan is a low income nation where $550 is the GNI (Gross National Income) per capita. Imagining the Ease of Doing Business, predictable categories can come to mind that include enforcing contracts and getting electricity. In this index, they determine a rank after quantifying the number of procedures, the time, the cost, and other relevant variables. The numbers for Afghanistan, where the stats were most available, are based on Kabul.

Giving us a picture of Afghanistan’s economy, below you can see where they ranked for each category:

We could say that the Index of Economic Freedom and the Ease of Doing Business present some misleading statistics aboutAfghanistan’s economy. While all they say is accurate, the numbers do not tell us that Afghanistan is the world’s leading exporter of illicit opium.

But value went down:

Geographically, opium cultivation is widespread. Trying to quash the opium trade, the U.S. paid farmers to plant wheat and saffron and tried to defoliate the poppy crop. It did not work. With the Taliban making big money from illicit trade, they successfully perpetuated the industry:

So now, with the U.S. exiting and freezing central bank assets, the BBC tells us that the countryside economy is collapsing,  there are no remittances coming from abroad, cash is sparse, and hyperinflation is a possibility. The people need need food, clean water, healthcare, and open borders.

My sources and more: During yesterday’s walk, I listened to the BBC’s Business Daily report on “The economics of the Taliban.” From there, I tried to check some facts on Afghanistan’s economy through this article, the World Bank’s Doing Business survey, and the WSJ Index of Economic Freedom. I also located specific rental data and found that Professor Jonathan Goodhand’s research was helpful. But the best article was from Reuters on the opium trade.

Why We Need to Name Heat Waves

Deciding if the Federal Government Should Borrow or Tax