My Book of the Month: Why An Address Matters

At 34th Street and Park Avenue in NYC, there once was a battle over an address. A very rich lady named Martha Bacon claimed that she lived at 1 Park Avenue. Meanwhile a real estate developer said that his building, located two blocks south, also occupied that #1 spot. They brought their fight to court and the judge said she really lived at #7 Park Avenue.

I’ve pointed the arrow at the Bacon home. When the beginning of Park Avenue was moved down to 32nd Street from 34th, Mrs. Bacon’s home became #7: 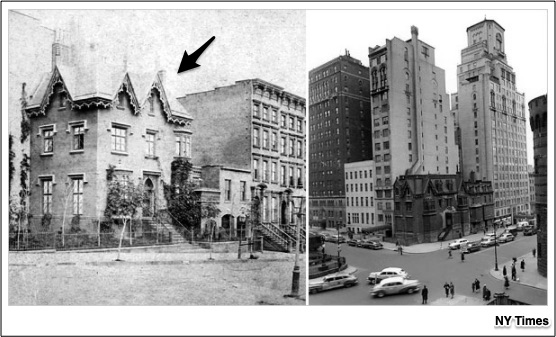 Addresses matter. More than a number and a name, an address provides an identity.

For state pensions and bank accounts, addresses matter. If you are among India’s poorest people and have no address, then you might not be able to receive a state pension or open a bank account.

But it’s not necessarily easy to get an address. In Calcutta, when the government decided numbering houses would solve its double counting problem, they had difficulty deciding what a “house” was. In a high income country, you could count separate dwellings and rental units, but not among the poor. Authorities in Calcutta (now Kolkata) had the impossible task of giving an address to each of two families when they lived together in a single room. (The recent solution is Google’s Plus Codes addressing system.)

City officials also had to decide what to name and what to number. When streets were first named in England, they referred to a landmark, an event, or a destination. The London Road wound up in London. And you know why you might go to Haberdasher Alley.

And from here, we can leap to mail delivery and the commerce that it jumpstarts. In England, after the battle was won for a nationwide penny post, from 1840 onward, all letters, no matter their destination, could be sent for the same price. Thought too cheap, soon the low price created a bustling postal service that poured money into the exchequer.

Even the zip code has an economic significance. It was first proposed by a Philadelphia postal employee in 1944 and then adopted approximately twenty years later. Today, as a source of efficiency, it saves billions of dollars.

An economist might say that addresses are all about externalities. Defined as the spillover experienced by an uninvolved third party, the externalities created by address are good and bad, positive and negative. According to a house number scholar, house numbers proliferated because they let the government find you. In the 18th century colonies, the British distributed addresses so they could keep track of revolutionaries. In 1770, when Maria Theresa, empress of the Habsburg Empire, needed more men to fight a war, her solution was the street address. Using painters that (reputedly) inscribed 1,100,399 numbers, she could know who was and was not contacted. At the same time, in the world’s major cities, people began to recognize the need for addresses. As numbers spread, so too did the need for more literacy.

Returning to where we began, we should note that now an address can be bought in NYC. For $11,000, a developer can buy, for example, a Park Avenue address, even if the building is just nearby.

So where are we? I’ve selected a slew of disparate facts from The Address Book What Street Addresses Reveal About Identity, Race, Wealth, and Power. It is an engaging book with much more than I have shared. Do take a look.

My sources and more: In addition to The Address Book by Deidre Mask, I recommend this NY Times article with the delicious story of the Bacon battle for 1 Park Avenue.

The Basics of the Pandemic Recession