When the surrealist painter René Magritte told us that, “This is not a pipe,” he was saying that all is not necessarily what it appears to be. What we are used to thinking and seeing could really be somewhat different…

Our story starts during the 1700s (or so) in the North Pacific. Legend has it that two competing Yap islanders traveled to the Palauan archipelago where they found limestone. 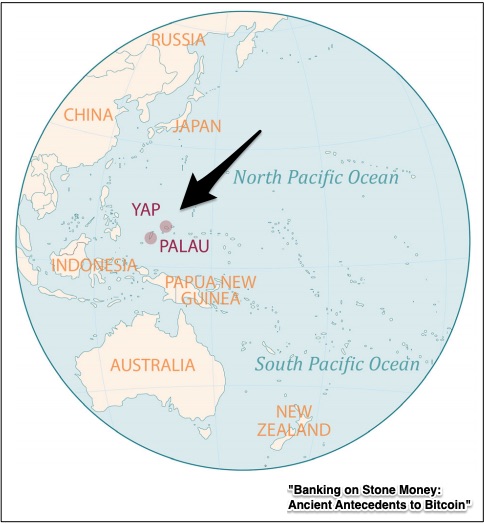 The limestone became a form of Yap money. On Palau, they had to negotiate access to limestone deposits, sculpt stones into  shapes like the moon (after deciding against a fish form), and transport them home over rough waters. At home, their creators got prestige and payment while the recipients distributed it. Called rai, the value of a circle depended on how tough it was to make and transport, its size, and previous ownership. When rai was placed outside someone’s home or nearby, there it probably stayed–even if given to someone else, perhaps as a dowry. The entire community knew who owned what. Every individual’s information confirmed who possessed a certain piece of rai.

These images of rai include one (F) that is under water and still retained its owners, value, and transfer potential:. 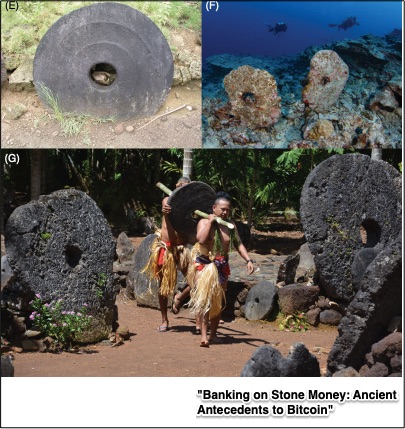 Yap money has been compared to Bitcoin. The scholars that say they are similar cite the effort it takes to create each one. For rai, it’s the trip to and from Palau while for Bitcoin, mining requires gargantuan computer processing time and electricity to figure out its algorithmic puzzle. If successful, the new Bitcoin becomes a part of a public record through its blockchain entry. So too does rai though the community’s common knowledge. Furthermore, neither requires tangible possession to claim or transfer ownership. The community, whether people or blockchain, confirm its status.

Our Bottom Line: The Meaning of Money

Economists like to say that a commodity is money if it has three characteristics. As a medium of exchange, people should be willing and able to use it for trade. The commodity also needs to represent a unit of value because we have to know what it is worth. And finally, we want our money to store its value. From one year to the next, it should have approximately the same purchasing power.

The Yap rai and Bitcoin do not entirely fit our definition.

They make us ask, as did Magritte, if something is not what it appears to be. The rai and Bitcoin do not really appear to be money. But are they?

My sources and more: While this FT article gave the overview comparison, for the academic detail on Yap money and bitcoin, I recommend this paper. Also, if you want to read more about the Magritte painting, one possibility is Artspace.

Why Taxes Are About More Than Money