From Grocery Carts to Robot Armies

Ignoring many of the milestones in grocery store history, I would like to look back at what might be the two biggest.

Then, after going to carts and barcodes, we can look ahead.

In Memphis, Tennessee, 105 years ago, the world forever changed when self-service began to replace the general store. In 1916, shoppers were used to giving the clerk a list. Then, item by item, he gathered what you needed and figured out the prices. One store owner, though, decided to experiment with self-service. Stocking his Piggly Wiggly with more than 1,000 items, he placed the butter in refrigerated cases, pre-bagged the flour, and carried national brands like Campbell’s soup. As for the prices, little hooks held the tags. Even the shopper’s basket was an innovation.

But the basket became the problem. As we might expect, people checked out when it became too heavy. It took 20 years  (1936) for another Piggly Wiggly store owner to figure out a solution. The first wheel-around cart was made from two folding chairs in which you could insert two baskets. Immediately doubling per customer volume, purchasing continued to grow.  By 1950, new cart technology led to wider aisles and a checkout that accommodated volume.

A milestone in grocery store history, this was the first cart. You can see that two baskets immediately doubled what a shopper could buy: 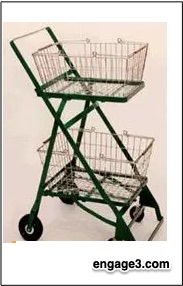 As supermarket volume grew, so too did the need to keep track of everything. The result was the invention of a small symbol that identified each product. Once the Universal Product Code system (UPC), was on most items, it could speed up checkout lines and, by recording sales, boost inventory control. Now stores instantaneously knew what they were selling, what needed to be ordered, and what should be promoted. Price changes became easy since they no longer had to change thousands of stickers. By 1980 more than 90% of all grocery products had a barcode.

There were several possible designs for the first barcodes:

The next major milestone could be the robot picker. Although more of us are buying groceries online, supermarkets are not set up for the pickers that are supposed to speedily put together our orders. In a traditional store, as product placement guides us, it encourages some impulse buying. However, it also slows down gathering online orders. Recognizing the problem, in Monroe, Ohio, Kroger has a 350,000 foot facility where robots race around on tracks among 28,000 items. It reputedly takes just 5 minutes to put together a 50 item list.

Wheels on carts, barcodes, and robots have increased supermarket productivity. Defined as the fraction that compares input, to output, productivity grows when land, labor and capital create more goods and services. Frequently the reason is technological innovation–like the kind supermarkets developed.

My sources and more: Yesterday, the NY Times  started me thinking about grocery store history. The article took me back to econlife posts on the first bar code and  Piggly Wiggly. And then, I moved onward to the Atlantic,  Bloomberg, and Mental Floss.  Still not done, lastly, I found more on barcodes in this  NY Times article. And I wound up wondering what is next. (Several sentences from today were in previous econlife posts.)

What the Fed's Dot Plot Tells Us