How and why does UPS get my package to me so fast?

Occasionally, I have asked the UPS man who is always so gracious to wait a moment at my front door while I go to the kitchen. Taking a minute or so, I grab an apple for him. In a Planet Money interview, the person in charge of UPS data said that, “Just one minute per driver per day over the course of a year adds up to $14.5 million.” (I’m sorry, UPS.)
The UPS data center knows how frequently drivers back up, when they brake, how fast they drive. The firm knows when the driver buckles a seatbelt and when he starts the motor. Drivers have a special key that cuts the time it takes them to get into and start a locked truck. A computer organizes their packages according to the delivery route so that mileage is minimized. One UPS guy says that when he started with the firm nearly 20 years ago, he could deliver 90-100 packages a day. Much more productive today, he totals close to 130.
I suspect that decades ago, we would not have predicted the leap in UPS productivity. And that took me to Baumol’s disease.
Almost 50 years ago, economists William J. Baumol and William G. Bowen hypothesized that industries like health care and education and also the performing arts would experience “stable productivity.” Using their now-famous quartet example, they said “The output per man-hour of the violinist playing a Schubert quartet in a standard concert hall is relatively fixed, and it is fairly difficult to reduce the number of actors necessary for a performance of Henry IV, Part II.”
By contrast, other industries like agriculture have made huge productivity strides. According to Wake Forest economist Robert Whaples, using corn as an example in a Great Courses lecture, labor productivity increased 45-fold between 1910 and 1980. In 1910, a corn farmer harvested 3/4 of a bushel of corn per hour of work, by WW II, 1 1/4 bushels an hour, during the early 1960s, hourly output rose to 9 bushels and then, by the early 1980s, it was up to 33 bushels an hour.
Here is some recent productivity data from the St. Louis Fed: 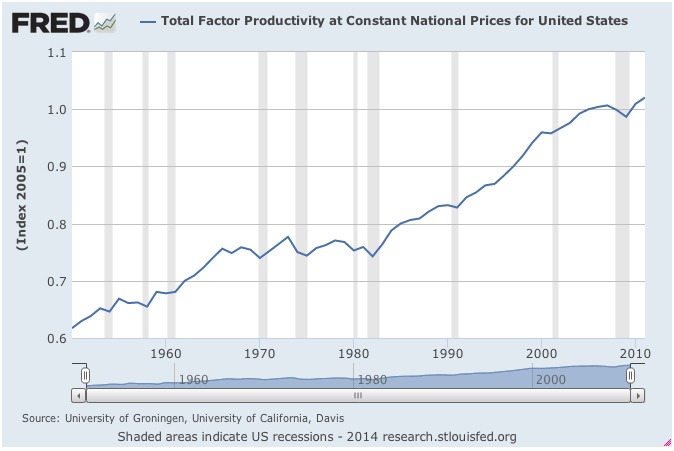 Our question is whether every economic sector has hidden productivity potential that just needs to be developed. MOOCs in education? Affordable Care Act cost cutting for medicine?
Sources and Resources: As always, Planet Money’s podcast was excellent as was the Whaples “Modern Economic Issues” lecture (#4). I also enjoyed looking at parts of the Baumol/Bowen paper and then a Bloomberg View and Tyler Cowen current day dissent.

What You Might Not Know About Alibaba's Jack Ma

Airline Product Differentiation: It's About More than Just Plane Comfort