Why Federal Spending Is Tough to Predict for Entitlement Programs

During 1965, President Lyndon Johnson called Wilbur Mills, chairman of the House Ways and Means Committee, and said, “Wilbur, I’ve just been looking through the polls here, and I’ve only got a few weaknesses, and the worst of them is that I’m not doing anything for the old folks. I need some help from you.” The result? After the Congress passed Medicare and Medicaid legislation, it did not quite work out as they expected.

Today, looking at Medicare, Medicaid, and the American Families Plan, we will consider why it’s tough to predict the cost of entitlement spending.

Medicare has had some unintended costs. However, we can’t do a dollar comparison of Medicare spending because of inflation. Instead, experts have used a percentage of taxable payroll to conclude that, by its 25th birthday in 1990, Medicare spent 64 percent more than projected.

Medicaid also gave us some surprises. When Medicaid was passed, no one ever expected the gargantuan amounts that would go to nursing homes. By 1993, sending one-third of its budget to nursing homes, Medicaid had created an industry.

Looking back at  Medicare and Medicaid, you can see why it is tough to project future entitlement costs.

In its American Families Plan, the Biden administration proposes spending that includes childcare, education, and healthcare. The funding would come from extra taxes, additional IRS audits, and new IRS technology. A Penn Wharton Budget Model (PWBM) estimate disagrees with White House projections for its 2022-2031 budget window. Whereas the White House expects spending will be $1.8 trillion, the PWBM says the amount will be $700 billion more. Further disagreeing with the White House, the PWBM also expects a negative impact on the federal debt and GDP growth by 2050. 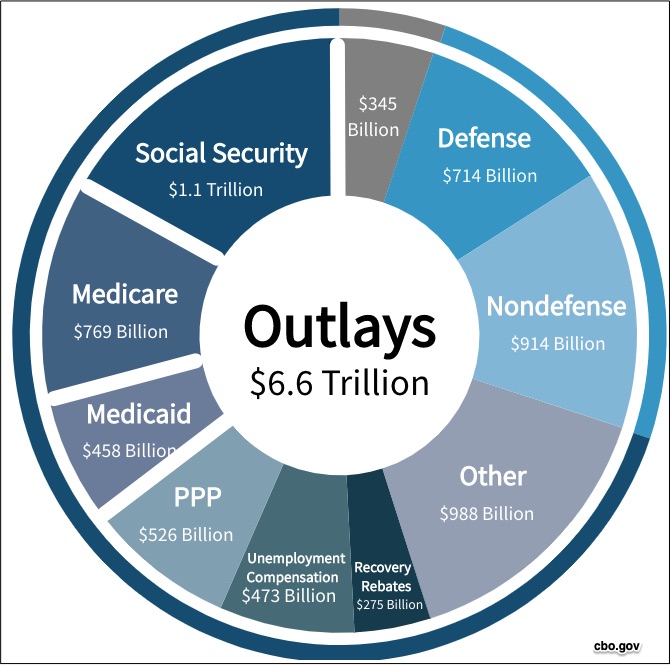 Including Medicare, Medicaid, and Social Security, it encompasses immense spending and depends on countless decisions from many millions of people. I suspect there is no way to avoid the unintended consequences created by legislation.

But what we do know is whether we believe in a government that spends more or less on social programs. So, returning to where we began, we could not predict where the Medicare and Medicaid budgets would go. Neither can we know for sure what the American Families Plan will cost.

But each of us knows whether we expect more or less from government.

My sources and more: For Medicare spending history, The Washington Post Fact Checker delighted me with an accurate analysis. Then, for my current version of conflicting spending projections, this White House fact sheet, the Penn Wharton Budget Model, and FactCheck.org were ideal. (Interestingly, the University of Pennsylvania is the home of PWBM at the Wharton School and FactCheck through The Annenberg Public Policy Center.)