For the 1982 movie, E.T., Mars was first offered the opportunity to have its M&Ms play a starring role. But Mars said “No,” Hershey said “Yes” for Reese’s Pieces and the rest of the story is history.

This three minute clip brings back the charming scene when E.T. follows the candy trail:

While Hershey did not pay for the cameo, it agreed to promote the film in its ads. Within just two weeks after the movie’s release, Reese’s Pieces sales soared.

When they consider a movie role, companies want to know the amount of time, the context, the cost. Some use brand brokers. These product placement firms are on the lookout for film cameos and then match the movie with the product. The cost can be multiple millions. Harley Davidson paid $10 million for its appearance in Marvel’s Avengers: Age of Ultron. Aston Martin got James Bond to switch from BMW after outbidding them with a $140 million offer. But also, it frequently is a free exchange of the product for the exposure. The movie maker thereby can save the money of buying something pricey like an auto and the producer gets the publicity.

A movie can get you a whopping 122 million views: 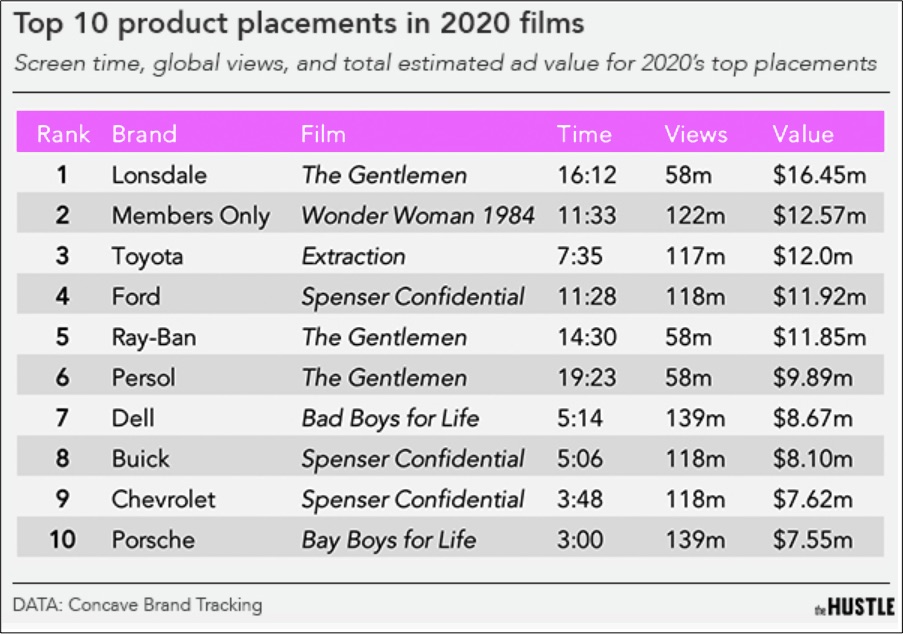 Finally, I just want to add one fact that I could not confirm for product placement but assume there was some. The Fast & Furious franchise wrecked 1,487 cars in its first seven movies.

First explained by economist Joseph Schumpeter, creative destruction is about the new replacing the old. It is the painful process through which existing industries, their technology, and their labor force become extinct. But the happy side is what takes their place. As the fuel that propels the market system, creative destruction ignites economic growth. We got Model T Fords instead of buggies, computers made typewriters obsolete, and we have Netflix.

Netflix (and firms like it) is one reason that product placement has become ever more important. In an age of creative destruction, with more of the new replacing what is old, companies need dependable marketing. That takes us to the movie product placement that is in streaming and now, increasingly in the music industry. According to one tracker, in 2019, it added 15 percent in value globally.

Movie product placement has an impact at the moment it appears but also repeats indefinitely with every viewing, perhaps for decades. Returning to where we began, Reese’s Pieces will forever benefit from E.T.

My sources and more: Thanks to The Hustle for reminding me to return to film product placement. From there, Snopes had more of the facts as did this paper. (Our wonderful featured image is from The Hustle newsletter. I recommend an email subscription. Also, several sentences from our Creative Destruction section were in a previous econlife post.)

Why Federal Spending Is Tough to Predict for Entitlement Programs