How Lockdowns and Legalization Are Changing Marijuana

Our opinion of marijuana has reversed: 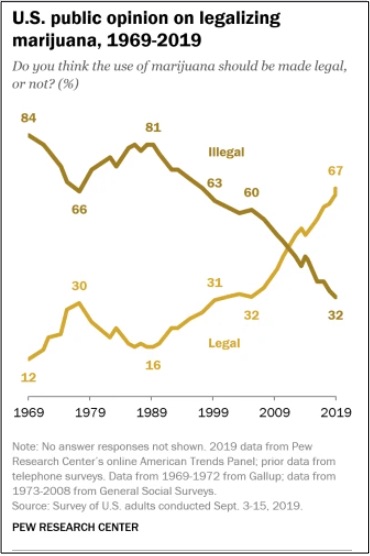 For many reasons, though, marijuana demand and supply are increasing.

Last April, marijuana sales soared in San Francisco when the lockdowns began. Compared to the same period in 2019, there was a 150 percent spike. Similarly,  the state of Washington and Colorado saw sales increases.  One survey found that 25 percent of their respondents hoarded marijuana because they were worried about shortages.

Marijuana gummies were among the edibles that created new (sales) highs:

And, Illinois noted a record breaking climb in marijuana sales:

Currently 33 states permit medicinal marijuana while 11 have said that its recreational use is also legal. After Election Day, Arizona, Montana, New Jersey and South Dakota could be added to the  recreational list. (On my New Jersey mail-in ballot, I had to vote for or against a state constitutional amendment that would legalize recreational marijuana.) Meanwhile Mississippi is deciding if it’s okay for doctors to recommend marijuana to their patients.

Dated June 17, 2020, this map displays the current legal status of marijuana. It is illegal in the red states and legal in those that are dark green. Light green and yellow shaded states permit some degree of medical use. However, they are different because one (light green) decriminalized pot and the others (yellow) had the opposite policy: 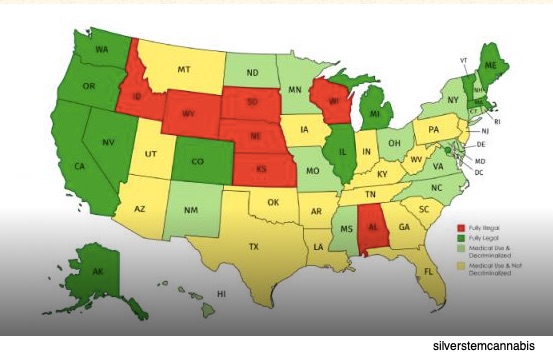 With lockdowns nudging demand up, we could say our demand curve shifts to the right. But then, a new marijuana crop has not boosted supply because, according to one marijuana website, supply typically decreases before yearly outdoor harvests become available during the late summer and fall,

If these reasons are accurate (and I am not sure) then demand rises to D2; supply decreases (moves left on the quantity axis) to S2; and prices go up: 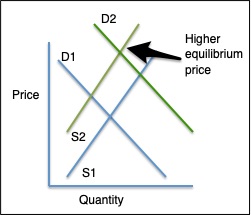 According to Colorado’s state Department of Revenue, marijuana prices are at a three-year high. It all began though when our opinions about legalizing pot reversed.

My sources and more: Once you start to look, you discover marijuana articles everywhere. Rolling Stone,  Quartz, and the Economist had the cannabis updates. From there, the ideal complement was the Pew Research surveys.

Our featured image of marijuana gummies is from Quartz.

Where a Vegan Sausage Won't Become a Vegan Tube

Why Buying Plum Jam Is Like Retaking the SAT