With “normalcy” returning, Uber is back in many of our lives.

On their lost and found page, Uber reminds us that Austin, Texas is their most forgetful city and phones top their list of forgotten items. Also, what we leave behind depends on the day. On Saturdays, it’s jewelry, on Mondays, we lose our backpacks and groceries, and Thursday, it’s celebratory stuff like birthday cards and gifts.

But the bigger problem for Uber riders is longer waits and higher fares.

When the pandemic intensified and riders no longer needed Uber, demand shrunk by 75 percent. At the same time drivers left. Now though, as we’ve begun going to restaurants and parties, Uber has more customers and a driver shortage. One woman in Miami reported a 19 minute wait rather than five minutes. And, she paid more too. She said that her monthly Uber budget for multiple rides had been $100 before the pandemic. This month, just four rides would use it up.

One rider suggested Uber needs to “keep customers happy” by dropping their rates and waits.

Our Bottom Line: Uber’s Supply Side

An economist might explain that lower rates would lead to even longer waits.

Through its Newsroom, Uber tells drivers that their median earnings per hour (not counting expenses) are $37.44 in New York City, $27.50 in Miami and $25.28 in San Francisco. For 12 other cities, the amounts range from $32.60 (Philadelphia) to $22.65 (Orlando). After all of the earnings examples, Uber says that they hope drivers will take advantage of the higher wage because it will return to normal levels.

Uber did not say that earnings will return to normal levels because they are high. On the supply side, more pay and Covid vaccinations shift the driver supply curve to the right. As a result of the increase in supply, quantity goes up and price does down: 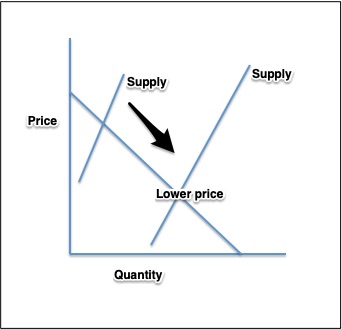 Only then, can riders get lower fares and smaller wait times. But for now, they cannot have both.

My sources and more: Through yesterday’s NY Times, we can see how an Uber surge could solve its driver shortage problem. Meanwhile, The Washington Post, here and here looked at Uber demand and here, the Uber Newsroom spoke about its driver incentives and earnings. And finally, do go to Uber’s lost and found page for some smiles.