An Illinois farmer said he was figuring out whether to use milk as fertilizer. With none going to restaurants, it’s getting underpriced and overproduced: 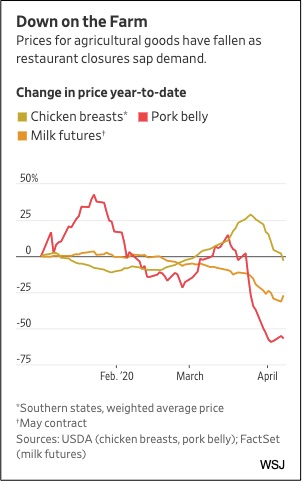 Instead of selling its milk to bottlers, or butter and cheese makers, a Wisconsin dairy farmer dumped 6,000 gallons into a manure pit because restaurants, hotels, and schools just aren’t buying it right now. WSJ tells us that seven percent of the milk produced last week was discarded. Think of those little wrapped pats of butter we get in restaurants and Starbucks. Processors are not repackaging it into the bars and tubs we buy in grocery stores. Similarly, it’s not easy to shift away from the 10-pound bags of shredded cheese that go to pizza restaurants. One Wisconsin cheese factory said sales plunged 95 percent.

Chicken and pork have been hit also. At first we wanted more chicken. But now, the reduced restaurant demand has hit the market. Farmers are breaking eggs rather than raising their chicks for slaughter. As for pork, McDonald’s does not need bacon now.

After steadily ascending, in 2010, our restaurant spending surpassed at home food expenditures:

This is not the first time farmers have destroyed their milk, even when people were hungry. After milk prices had halved between 1930 and 1933, a group of Wisconsin farmers formed a blockade near Madison to dump milk. Farmers had been asked to keep their milk rather than selling it. The goal was to boost prices by reducing supply.

Below, a freight train carrying milk was stopped by pickets who dumped some of the milk on board: 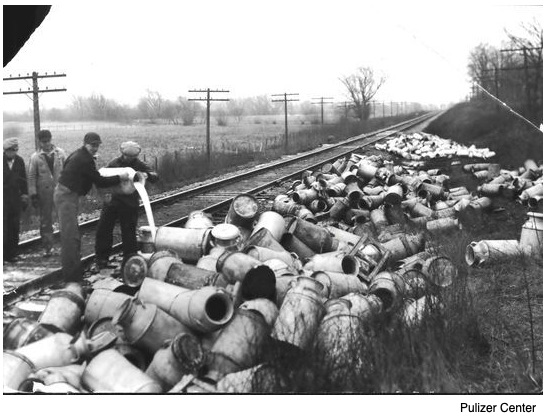 Classic supply and demand ideas explain why famers are dumping their milk like they did during the 1930s. Whether it’s payments to small businesses from today’s CARES Act or the 1933, Agricultural Adjustment Act, farmers can receive the government subsidies that let them produce less. 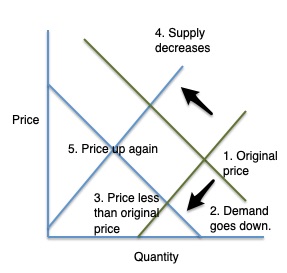 So, when you see the supply curve decrease by moving up and to the left, just think of dumping milk.

My sources and more: WSJ describes how farmers are discarding milk as did this Marketplace podcast. Meanwhile, the story of the Wisconsin milk strike was told here.

The Long Term Economic Impact of a Pandemic