Track star Allyson Felix is 34 years old. Beach volleyball player Kerri Walsh Jennings is 39. Both are (reputedly) deciding if they are too old to train for another year. Their problem is the 2020 Olympics.

Since the games will no longer take place in Japan from July 24 to August 9, more than 11,000 athletes have some unexpected dilemmas.

The Cost of Cancelling the 2020 Olympics

Some athletes are pleased that the games will probably be delayed for a year. For many, the coronavirus disrupted rigid training schedules. One Olympic swimmer could no longer practice in the Stanford University pool after the school had to close. Runners said the facilities they needed for strength training were unavailable. Other athletes who had been sidelined by injuries like Australia’s Ben Simmons can recover and Sally Pearson was going to skip her sprint or hurdles competition because her baby has a summer due date. We also have athletes who might have been too young for an event this summer but will be old enough next year and Chinese swimmer Sun Yang who might get the results of an appeal for a doping violation before 2021.

Also though, those who have already qualified are wondering if new tryouts will be scheduled. Others who had prepared for tryouts have had them cancelled as was the Olympic team baseball qualifier. Then, we have all of the athletes who timed their workout schedules to peak for the summer competition. Many also are wondering if they will be paid the stipends they now receive until or if a rescheduled Olympics takes place.

To all of this we can add Japan’s monumental costs. The Olympic village was going to become 5,632 apartments. What will happen to those that have already have been sold and due for occupancy? Japan is receiving massive revenue for the broadcasting rights. They have money from sponsors. They’ve built a $1.43 billion stadium. Among the 42 venues, some might not be available in a year. Others could need maintenance, new leases.

As economists, we define cost as sacrifice. It represents what we didn’t do because we selected something else.

Cost frequently relates to money. Japan is sacrificing somewhere between $12 billion and $27 billion to hold the Olympics. And now that the current date is cancelled or postponed, the financial cost could be considerable. Similarly, the broadcasters and sponsors will lose millions in revenue. NBCUniversal and Discovery are paying a total of $1 billion to get broadcast rights. (I’ve read that they are insured but will lose the “ad-driven” profit.)

You can see the gargantuan dollar cost of past Olympics: 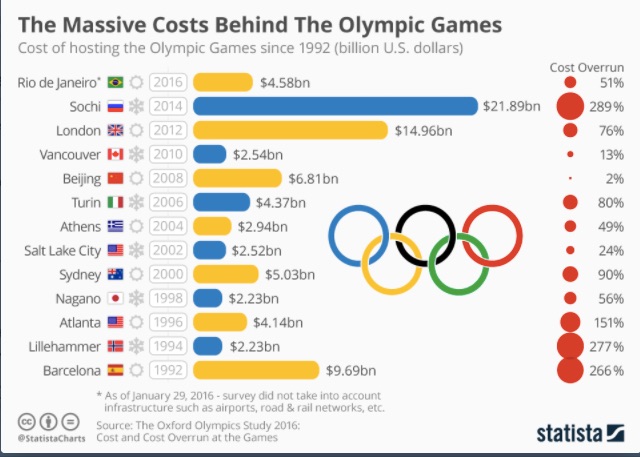 But there is more that does not involve money.

The cost to Japan could be prestige. For the broadcasters we have programming that needs to be created in the slots that the Olympics would have occupied. Most crucially though, each athlete has a very individual cost that relates to time and resources and relationships dedicated toward training for an event that at best will happen in the future.

These are just some of the countless costs created by Japan’s decision to cancel or postpone the 2020 Olympics. Only a pandemic or two world wars (1916, 1940, 1944) could make it all worthwhile.

My sources and more: WSJ  had the overview of the financial hit of an Olympics delay. However, to see the real impact, ESPN published a long list of individual stories and Newsweek had the impact on broadcasters.

The Ups and Downs of Consumer Spending

What Would John Maynard Keynes Have Said About Stimulus Spending?