The Ups and Downs of Consumer Spending

At first he placed recreational marijuana and liquor retailers on the non-essentials list of stores that had to temporarily close because of the coronavirus. But then, after just three hours, he announced an exemption. Like groceries, gas stations, and other essentials, they would remain open.

This was the line outside a Denver liquor store: 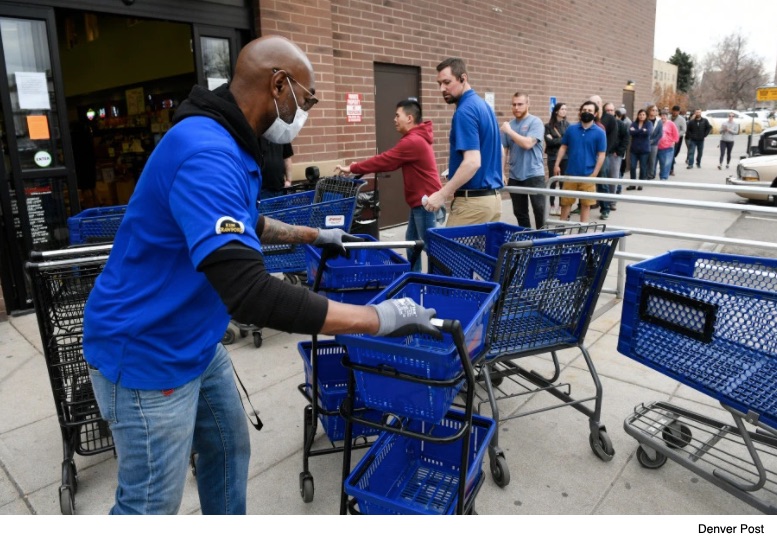 Lockdowns, and store closures have changed our spending patterns.

The numbers confirm that we have been buying more groceries:

We are also buying more marijuana. A WSJ journalist thought the rise was mainly for the cannabis edibles we can discreetly eat at home:

From the end of February through the middle of March, people bought more ammunition than during the previous three weeks:

As you know, though, restaurant traffic has evaporated (except for pizza take-out).

Open Table suggests that restaurant diners were up, compared to 2019, as recently as the beginning of February. But by March 16, the 77 percent dip was considerable:

Economists have said that the consumer has been propelling U.S. economic growth. At almost 70 percent of the GDP, you and I create far more economic activity than the other two major components: gross investment (mainly from businesses but also residential housing) and government.

If we divide consumption expenditures into durable and nondurable goods and services, we can see more precisely what might happen to GDP growth because of pandemic lockdowns. We are buying much less of the durable goods that last more than three years and of services.

That leaves the groceries but not marijuana that will support the GDP. Illegal nationally, marijuana is not necessarily included in GDP totals.

My sources and more: My daily listen to the WSJ podcast alerted me to this WSJ article on shifts in consumer spending. Meanwhile, the Denver Post told the story of the mayor’s reversal.