We used to be a convergence country. Wages, business formation, and investment tended to equalize across many regions. However, during the 1980s, the split started. With tech the basic reason, cities with highly educated workers attracted more highly educated workers. Their cost of living was higher, they paid more, they produced more, they fueled the country’s economic growth.

Now there is even more concentration. We can look at it in two ways.

First, we can focus on who has the most innovation industries. By innovation industries, Brookings  referred to 13 of the nation’s highest tech industries where STEM concentration is considerable as is R&D. They are referring to industries like pharmaceuticals, software and computer components, and chemical manufacturing. Meanwhile, the 20 Superstar regions where these innovation industries have traditionally been located include what you would expect like the NYC, LA, Chicago, Miami, and Austin areas.

But now it’s all shifting.

Certain areas have become innovation magnets. Brookings calls it agglomeration. Because talent attracts talent, they have an increasingly concentrated pool of highly educated workers, institutions that do research, and sophisticated suppliers. In just five areas–Boston, Seattle, San Diego, San Francisco, Silicon Valley–we can find 90 percent of the top new tech jobs created between 2005 and 2017. While some Superstar cities lost innovation jobs, these areas have added them: 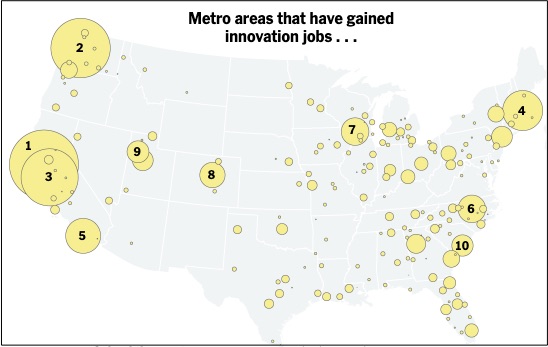 While these places have lost them: 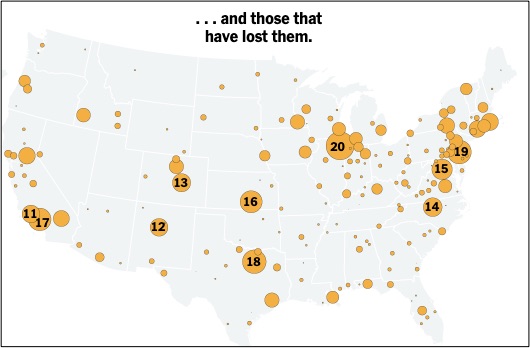 I wonder if we are seeing the urban version of Joseph Schumpeter’s creative destruction. Creative destruction is a painful process because industries disappear when the new replaces the old. And yet, it is the way that invention fuels capitalism.

With regional divergence, we are moving away from the convergence of the wages, business formation, and investment that tended to equalize many U.S. areas. Instead, a self-reinforcing agglomeration is attracting talent, R&D, and high tech production to a select few regions. Echoing creative destruction, the process also represents the new replacing the old.

Brookings expressed considerable concern about this idea inequality. Saying the market won’t solve the problem, their solution is to create new knowledge centers.

My sources and more: NY Times writer Eduardo Porter summarized this Brookings Report. All maps are from the NY Times.

A Simple Look at the World's Most Complex Economies