A Simple Look at the World’s Most Complex Economies

Harvard’s Atlas of Economic Complexity is very aware that toothpaste isn’t just toothpaste. It represents knowledge about sodium fluoride, the germs that create bad breath, and how to fill 180 tubes a minute:

The Atlas of Economic Complexity

At Harvard’s Growth Lab, a group of scholars developed the Atlas of Economic Complexity. Their goal was to display the “knowledge intensity” of a country’s exports. They were really just looking at land, labor, and capital. Asking if the nation’s goods and services came from factors of production that required lots of knowhow, they created a metric that compared 133 nations’ exports.

Their algorithm relates to complexity and connectedness. Calling an economy a “collection of capabilities,” they believed that complexity reflected the past innovation and the potential for future invention that fuels economic growth. But also they said you need “connectedness” so that one innovation leads to another one. Making computer components could lead to making computers. But mining could be a dead end.

The creators of the Atlas assumed that a country’s exports can be used to picture the level of that country’s knowhow. If you assemble an iPhone then you need one set of capabilities. But if you design it, you have different human and physical capital. And leaping to cotton exports, we would find a completely different network of capabilities. 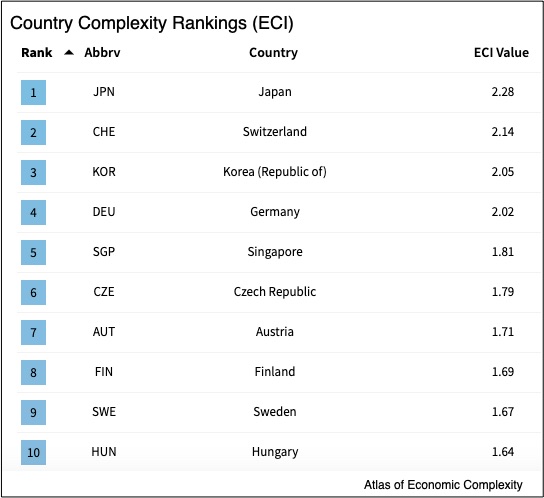 China has gotten an A+ in the Atlas’s algorithm. Evolving from textiles to electronics and machinery, China’s diversity facilitated its growth. Recently adding 54 new products, it has a platform for future growth that augments what its GDP says. While China’s GDP makes it the 55th richest nation in the world, its complexity index pushes it much higher.

A WSJ writer suggests that U.S. trade negotiators should have recognized China’s more complex exports. Instead of focusing on commodities, it’s the higher value of their goods that will shape (and threaten) our future trade relationship.

We could relate the complexity index back to Adam Smith’s description of a market system and hisWealth of Nations (1776). Whether looking back at 1776 or now, a factory’s division of labor is a crucial component of the market system because of what it procreates. Division of labor encourages expertise. When people concentrate on making one product they become better at it. They wind up with a springboard from which they invent new and better things. At the same time, the workers become increasingly affluent consumers with the incomes they receive. David Ricardo then added that the specialization we wind up with can lead to the benefits of comparative advantage, With comparative advantage, if nations make the items for which they have a lower opportunity cost, then everyone becomes more productive. And, it all began with division of labor.

For us it takes us to where we began. Even toothpaste can generate the knowhow that produces diversity and growth.

My sources and more: It’s wonderful how two seemingly separate stories can come together. Several days ago, I listened to an ABC Radio podcast on Australia’s export complexity. Then yesterday, WSJ connected the same complexity Atlas to U.S. China trade talks. Hoping to learn more about the Atlas, I went to the NY Times, and The Washington Post and the Harvard Gazette.  But to have the most fun, do go to the Atlas and play with its interactive tools.

Our featured image is the Atlas’s graphic of U.S. exports in 2017. The largest square, ICT, refers to Information and Communication Technology.