If you’ve recently bought a pair of Wrangler jeans, it is more likely that you are a Republican. Somewhat similarly, people who share the same politics shop for the same kinds of cars and alcohol.

Where are we going? To understanding our spending.

Recently, a consumer behavior research group looked at brands, shops, and products through a political lens. They wanted to see if Democrats and Republicans shopped differently. The answer was yes.

With Democrats on the y-axis and Republicans, the x-axis, the following graph compares buying behavior from 2004 to 2018. All downward sloping lines display an inverse relationship; As more Democrats favored the item, there were fewer Republicans and vice versa. Starbucks and Levis seem to have the only upward sloping line with more demand from both sides:

CNN and Fox News had the gargantuan changes: 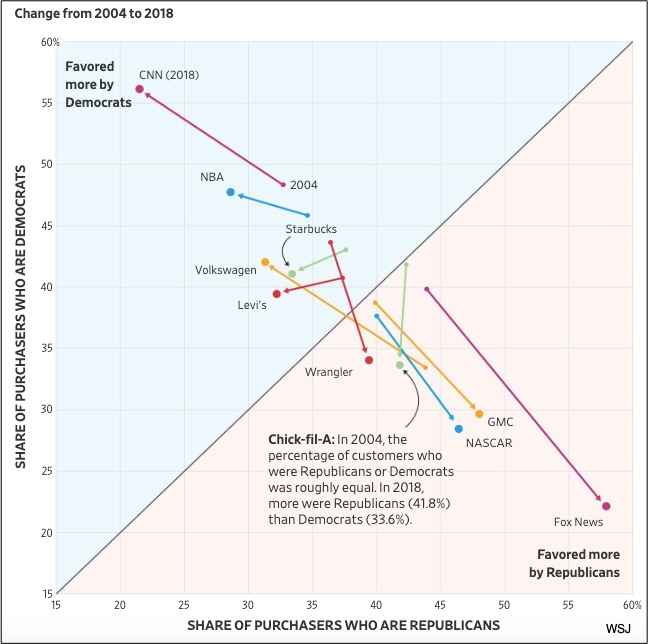 Below, this detailed version of our first graph shows the political divide for major clothing stores and brands:

Using a slightly different approach, economists from the University of Chicago’s Booth School also looked at our political purchasing divide (within a broader academic study). For politics, they wanted to see if they could accurately predict consumers’ liberal or conservative affinity through the products and brands they preferred.

Below, you can see that fishing is especially indicative of your politics: 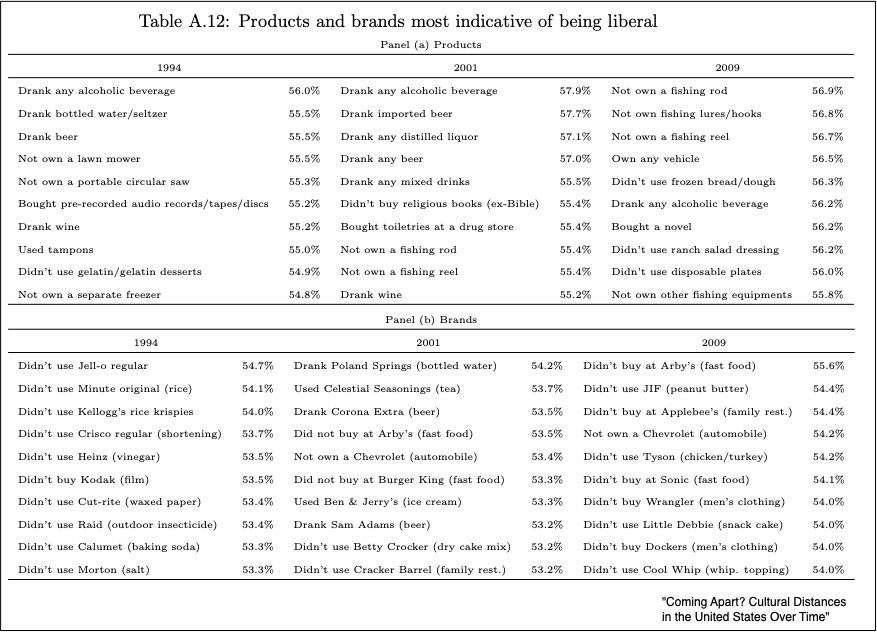 Fueling economic growth, consumer spending has been a crucial GDP component. As close to 70 percent of the dollar value of all goods and services our economy produces, it can be divided among services, durable goods, and nondurables. Examples of the services we buy include dental exams and cello lessons.  Then, our durables are the tangible items, like a car, that last more than three years. And, gone much more quickly, our nondurables are the lattes, clothing, and countless items we replace more quickly.

Zooming in on those consumer spending categories, today’s political lens might have also revealed an urban rural split in which the difference in pickup truck sales and fishing is as simple as where you live. It also could relate to a social position taken by a firm. After Levi’s publicized its support for gun control, the jeans maker got more support from Democrats. Wrangler meanwhile said it prefers to be associated with rodeos. Researchers have also noted a generational difference that could determine alcohol preferences.

I guess we can say that consumer spending is about so much more than one click.

My sources and more: This WSJ article provided the ideal first look at our consumption divide. Completing the picture, The Washington Post had the ideal summary of this NBER working paper. All were fascinating.