The design of our coffee cup lid makes a massive difference.

The industry standard has resembled the Solo Traveler. Designed in 1986, the Solo was called a “Humble Masterpiece” by the Museum of Modern Art. I disagree. Tilting the cup, we never know when the coffee will enter our mouth. Until that first sip, we don’t know its temperature. As for an aroma, there is none.

But there is something better. Just a lid, it is about much more.

Drinking from an open top ceramic cup, the coffee aroma can flow to our nostrils and give our brain the message. The open top optimizes the position of our lips. If we pucker when we drink our coffee, then our soft palate could close and eliminate the connection between the back of our mouth and our nose. When our mouth is relaxed, the coffee aroma can travel to our nostrils.

What matters are smell, taste, and spill. A new kind of coffee cup lid targets the three problems. In addition to its designer/manufacturer, Wired and Gizmodo concluded that the Viora lid can deliver some real coffee. Its triple width hole creates flow like an open top ceramic cup so you have some intake control. Crucially for our taste, it lets our nostrils get a whiff. And the slant of the lid diminishes the spill.

You can see the difference in the size of the Viora and Solo Traveler drinking holes: 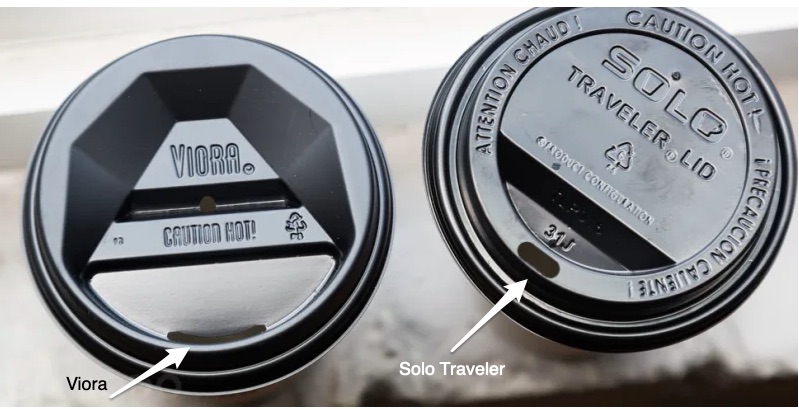 With daily coffee consumption reputedly close to 400 million cups and Starbucks accounting for what could be 8 million, a better cup could have considerable spillover. Defined as the positive or negative impact on unrelated third parties, the spillover from a new coffee cup lid just starts with the Starbucks or Dunkin’ consumer.

Oddly, our coffee lid reminded me of the 19th century canal building boom.

First, the Erie Canal, and then a host of private and public copycats, dug waterways that connected two places in the U.S.. The Erie Canal connected Albany and Buffalo, New York. But really it made a national market feasible because farm goods traveling from the Midwest and beyond now had a connection from Lake Erie to the Hudson River and the East Coast. With many of these canals, the people who invested made little. But the public benefited immensely as they became the transportation infrastructure that fueled economic growth. We could say that the spillover traveled far from each waterway.

I feel the same way about the coffee cup lid.

My sources and more: Wired and Gizmodo were perfect for learning about the new coffee lid as was its manufacturer, Vioralid. Then, for even more, The Atlantic presented some detailed cup lid history. And finally, you might enjoy (as did I) this WSJ column on how “It takes a Village” to make a cup of coffee.

How We Can Benefit From a Billionaire