The man had just asked his friend to keep an eye on his workshop while he was away. His friend did as requested and wound up in court. The problem was the boiler. The man reconnected it, turned on the heat, and destroyed close to half a million hidden euros. Concluding it was an accident, the court said the friend owed nothing.

The place was Soest, Germany where saving a lot is not unusual.

In the developed world, Germans are among the biggest savers:

According to WSJ, in Germany there is a saving culture where thrift is a virtue. Together, German consumers have a cash stash that has been estimated at €140 billion. German companies are admired for hoarding profits. The country has a budget surplus.

You can see that Germany is the only country in positive territory:

Behind only Sweden and Luxembourg, again, Germany is among the top savers. On the following graph, the U.S., at approximately 7 percent, would be next to Denmark: 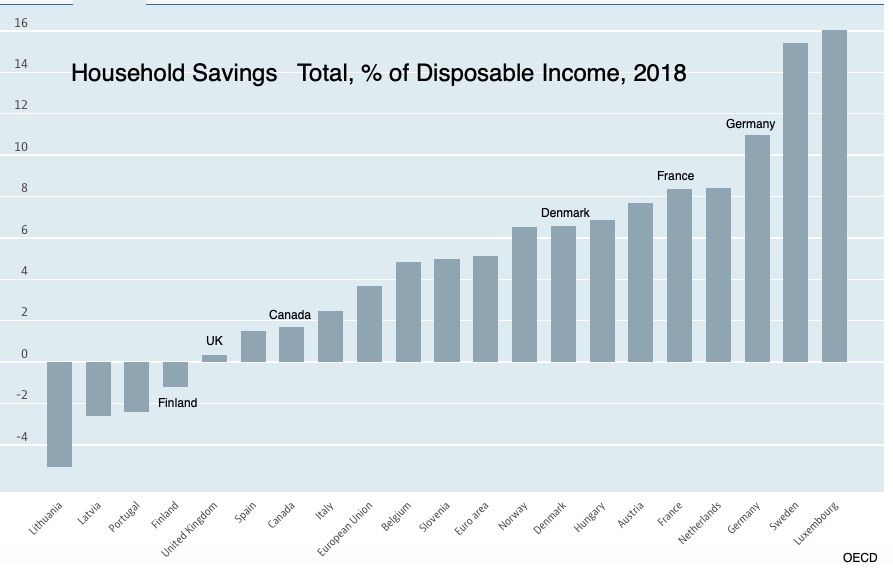 There are two things you can do with your disposable income. You can spend it or save it. With saving, you defer consumption and instead store it in some asset.

Related to a long list of reasons, individual saving can vary considerably. It could relate to our age. The young tend to be the savers and the old, the “dissavers.” We could be worried about losing a job or getting sick. Inflation also can influence savings. If it’s too high or too low, we get less in the future. And, beyond the specific logical reasons, saving could be cultural or habitual.

Returning to Germany and a national savings rate, we can conclude with Goldilocks. Economists worry about the current economy when consumers spend too little and they get concerned about the long term when they spend too much. Not too high nor too low, a sustained savings rate for a country might be just right at somewhere between 5 and 8 percent.

My sources and more: Thanks to my Hutchins Roundup email for alerting me to the Germans that save and this WSJ  article. I also recommend this Richmond Fed interview, an econlib article, and Modern Ghana for the boiler facts. Then, moving beyond, this IMF paper was perfect for learning about China’s high savings rate.

How Chargers and Railroad Tracks are Similar