How We Can Benefit From a Billionaire

In just five areas–Boston, Seattle, San Diego, San Francisco, Silicon Valley–we can find 90 percent of the top new tech jobs created between 2005 and 2017 in the U.S.

With talent attracting talent, a very few places are becoming innovation magnets. They have a concentration of talent that is draining other parts of the nation. As a result, a few localized economies have been vibrant and growing while too many others are not.

You can see the difference in output per worker between innovation industries (blue) and other industry groups in U.S. metro areas: 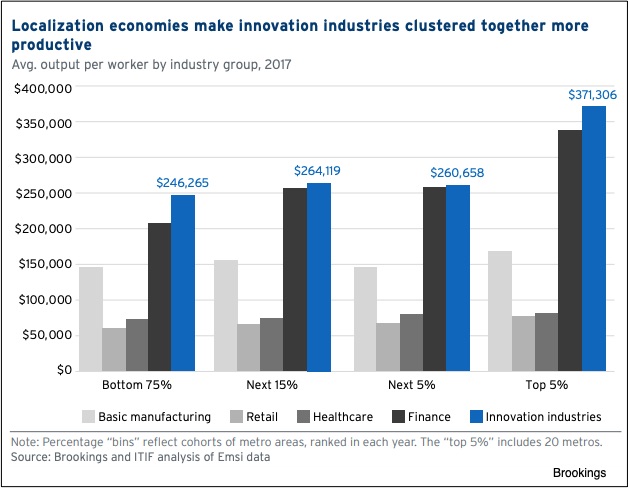 The word is agglomeration. Recently econlife looked at the problem. But now there is more.

Through a $100 million gift, a technology entrepreneur and his wife are funding the creation of a new tech center in Portland, Maine. The center will focus on artificial intelligence as a satellite campus of Northeastern University. Its courses will relate to areas that include biotech, data visualization, precision medicine. The goal is to feed tech businesses in Maine with labor and learning. And this is where a partnership enters the picture. Tech companies in Maine have said they will be corporate partners that help to pay tuition, enroll students, provide employment and training.

The plan is almost precisely what Brookings (a nonprofit that does policy research)  suggested. In their explanation of the destructive economic divergence that was dividing the U.S., they said we needed new learning centers. And, since the market was not doing it on its own, someone had to initiate the process. Brookings said it should be government. Starting with a nationwide competition and ending with 10-year grants, the Congress could create a sprinkling of high tech knowledge centers across the U.S.

In Portland, it’s the private sector.

As the center’s benefactor explained about Portland, “We live in an innovation economy, but we are not participating fully.” The gentleman’s name is David Roux. He co-founded a CD-ROM business and then sold it to Lotus. He also worked at Oracle and founded a major VC firm.

We can think of the market as the process through which demand and supply create a valid equilibrium price and quantity that satisfies all participants. Sometimes though, the market fails when individual incentives lead to outcomes that are not good for all of us.

The market was creating what Brookings called agglomeration. In existing tech centers, it was adding to the concentration of talent and growth rather than geographically dispersing it. When the market fails, government can correct what is wrong. It happens all the time with a polluting company that has to do a cleanup.

For Portland, Maine, instead of government, a billionaire is correcting market failure.

My sources and more: Recently, we looked at the concentration of tech centers in this Brookings Report. Now, more news from the NY Times and the Portland Press Herald completed the picture.

Throwback Thursday: What Past Super Bowl Ads Said About the Economy