It might be the subway emergency exits or perhaps a culture that condones it. But even with more police, fare evasion is up in NYC.

Our story starts in the UK. Home to a Nudge squad, the British government looked to behavioral economics for some policy insight. They believe that the structure within which people make decisions–their choice architecture–shapes how they think.  They tell us that a default for a health plan attracts more people. Car dealerships create option packages because it is easier for people to choose them. And, when the Nudge Squad had too many tax “procrastinators,” they sent a letter that said, “The great majority of people in your local area pay their tax on time…”

Similarly, behavioral scientists suggest that it could be wiser to focus on the good behavior of the fare payers rather than the evaders. At Australia’s Monash University, they asked why people evade fares. The answers took them to: 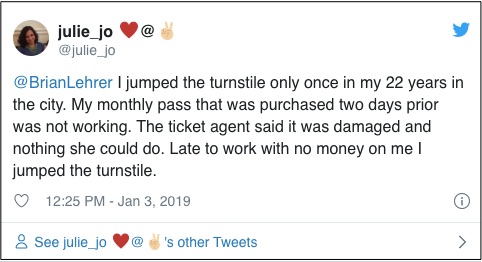 Knowing more about the evaders lets policy makers target each group. So they sought to make ticketing easier and less complex for the first two groups. But also, they wanted less acceptance of the deliberate evaders. That meant replacing an emphasis on punishment with a condemnation of the fare evaders. It required complimenting the payers, emphasizing honesty, and calling farebeaters cheats and freeloaders.

We could say that social norms are our society’s glue. Determining what we expect from ourselves and others, as a common bond, they shape our behavior. With fare evasion, acceptance erodes the social norm of honesty. Calling the evades freeloaders and cheats creates a support for a social norm that will encourage the behavior that preserves it.

Or, as one social scientist said, “if everyone else is doing it, it’s probably okay for me to do it as well.”

My sources and more: Yesterday’s WSJ alerted me to the fare evasion studies. From there, hoping to learn more about the solutions, I went to The Atlantic and Monash University study.

The Red and Blue States That Like The Same Halloween Candy