Where Has The Middle Class Gone?

A recent WSJ article tells us that “the American middle class is falling deeper into debt to maintain a middle class lifestyle.” Correspondingly, a new NBER paper points out that the share of U.S. workers that earn a middle class wage has declined. However, that drop was accompanied by an increase in the share of workers who rose to the top earnings group.

Let’s try to figure this out.

Middle income households report that they are borrowing more. Combine student debt, and an auto loan with a mortgage, and you wind up with large numbers.

The big problem is that household income is rising at a lower rate than expenses: 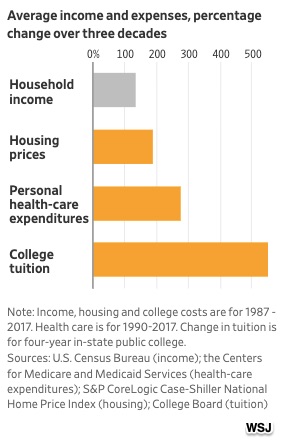 To make up the difference, we are borrowing more. According to the Federal Reserve Bank of NY, our debt is rising: 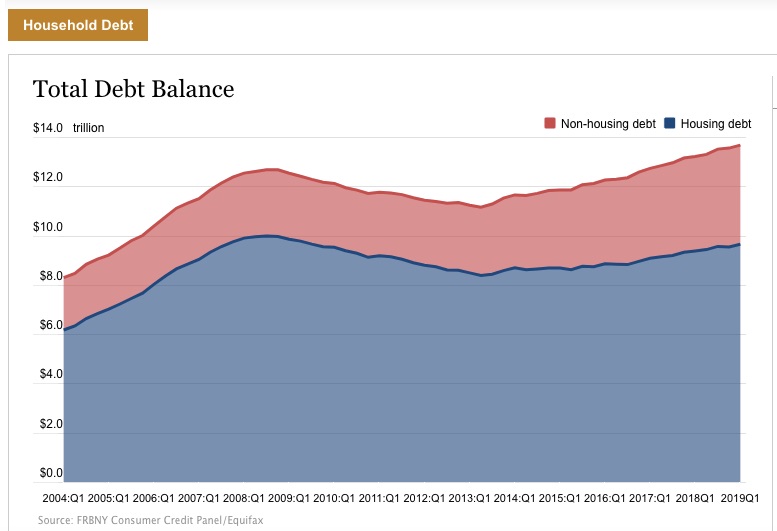 Excluding mortgages, consumer debt is higher than ever before. No, mortgage debt is not back to pre-recession levels, But it is also climbing there: 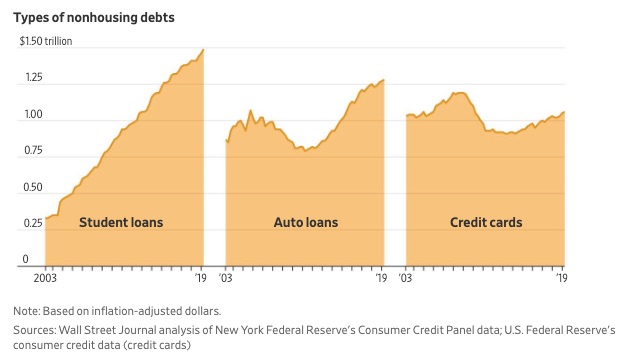 At this point you might be guessing that we have a shrinking financially challenged middle class. But where is the middle class worker going? This is where we have a surprise.

Using data from 1973 to 2018, researchers concluded that the middle class did indeed shrink. However, many of those leaving it moved upward. You can see below that the share of workers in the upper wage range rose. Meanwhile, the share in the bottom “bin” went down: 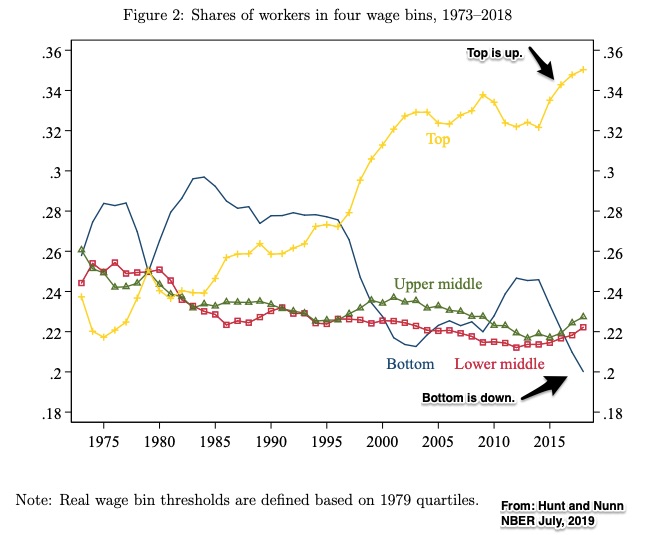 Looking closely, we could say though that the women fared better than the men. Yes, between 2003 and 2012, there was a female increase in the bottom “bin.” But after, their entire ascent tended up. Looking at the men’s yellow line below, you can see the 1980s dip and then some ups and downs until a recent rise. (Do note that the graphs have different y-axes.)

The Reasons? For men and women education topped the list. After that though, women’s average incomes rose because of their occupation and then their age. For men, the second strongest cause was age.

So where has the middle class gone? Many have risen to higher income “bins.” However, the debt data imply that the rise has not been enough to cover a middle class life style.

My sources and more: It’s always fun when several disparate articles converge. It just happened with this NBER paper on middle class wages, this WSJ on middle class debt, and the NY Fed’s quarterly look at debt. Finally, to enter territory I’ve not covered, do look at this Pew Research on the middle class, race, and ethnicity, and here for their corroboration of why the middle class is shrinking.