Last May, econlife considered why one of Nantucket’s most popular restaurants, Nautilus, would want a line. As we explained, the only table you can reserve beforehand seats eight. Otherwise, during the summer, the queue is the rule. On the day you want to eat there, it’s best to make your reservation in person between 12 and 1 by standing in a line that typically forms hours earlier. After one, you can call. But they are usually “fully committed.” 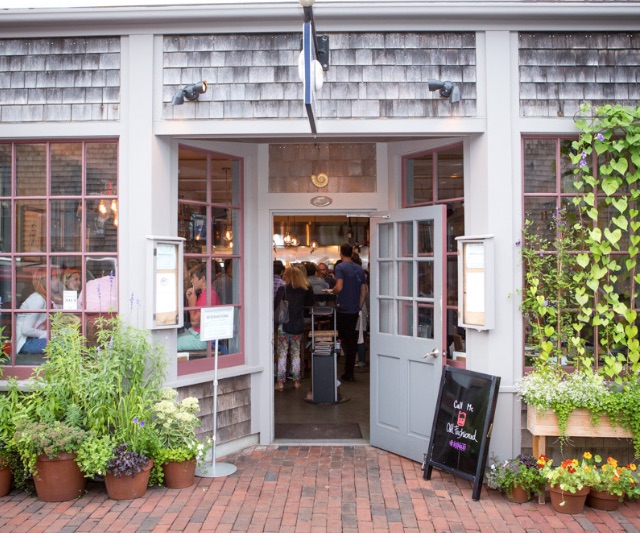 Yesterday a member of my family joined that queue. She successfully secured our reservation and, last night, we had a wonderful dinner.

But I wanted to share what she said about the line. A 10-year-old boy occupied the #2 spot. Seated in a beach chair with his book and his Gatorade, during 90 minutes or so, he was visited several times by someone who appeared to be his dad. Then, at 11:56, four minutes before reservations began, the boy left and the dad took over. Rumor had it that the boy was getting $20 and a sweatshirt for his labor.

The boy in the beach chair took me to the market in line sitters. We last looked 4 1/2 years ago so it’s time for an update.

Saying “We wait for your wants,” a N.Y. firm called Same Ole Line Dudes has made line standing a profession. Their list of lines includes Hamilton tickets, SNL standbys, and Cronuts (which they then deliver). From reading about other line sitters, I’ve gathered that demand soars on Black Friday, for big Supreme Court cases, and for seats to Warren Buffett’s annual Berkshire Hathaway meeting. Because you have to join the Berkshire Hathaway line at 4 am or so for the dash in to get a seat when doors open at 7 am, Buffett told WSJ that hiring a line sitter “Is probably what I would do.”

For hiring a line sitter, basic prices appear to range from $30 an hour to a minimum of $45 for two hours. However, line sitting companies have their equivalent of surge pricing. The price goes up when it is very cold, very hot, raining, or snowing.

If you peeked at their websites, you would see that there is much more to line sitting than we could imagine. (Same Ole Line Dudes even has a rate for Hypebeast Sneaker releases.)

The Nantucket restaurant Nautilus, though, has posted this warning on its window: 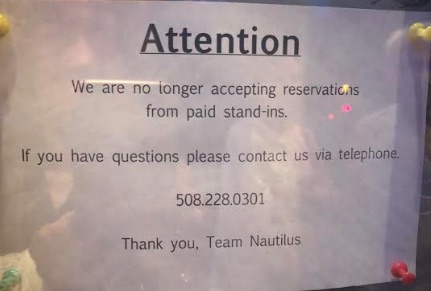 I suspect though that it is still okay for a dad to pay his 10-year-old son.

My sources and more: If you are going to Nantucket, you might want to read the Nantucket Today description of Nautilus or go to their website. For more about line sitters, this Money article has an overview and WSJ, the Warren Buffett annual meeting lines. But you will have the most fun reading this NY Times article on lines from 2012.

Please note that several sentences about Nautilus were excerpted from  a past econlife post.

Where Has The Middle Class Gone?