Last November, an ATM in Houston accidentally spewed $100 bills. After word of the glitch circulated on social media, a long line formed until law officers came to guard the machine. It turns out that the vendor loaded hundreds instead of tens. Bank of America said that customers could keep the mistaken withdrawals.

Where are we going?  Since we’ve considered countries like Sweden that are becoming cashless, today, let’s look at cash.

In the U.S. our use of cash has been somewhat constant.

In addition to ATMS, we get our cash from bank tellers, payday lenders, family members, and the employers who pay us in cash. How much do we carry with us? The average in a wallet (or a pocket or purse) was $61 in 2016.

You can see below that we used cash for slightly less than 30% of our payments: 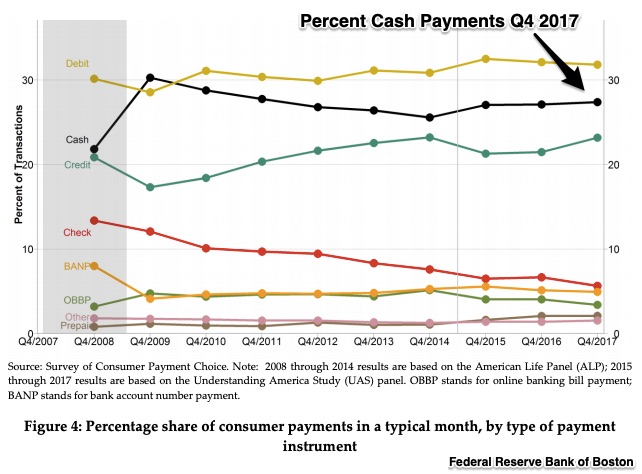 However, you also can see that we use cash for purchases but not for most bills: 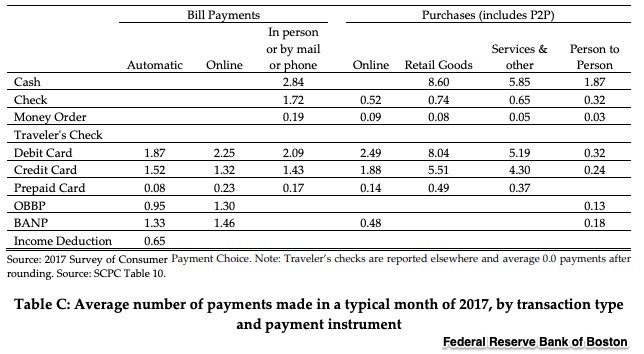 The Swiss keep a lot more in their wallets than we do: 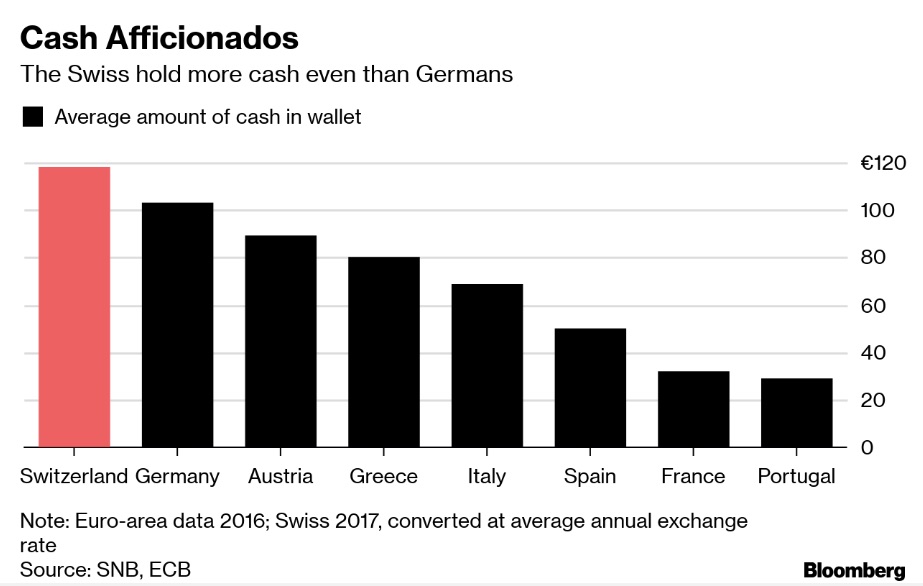 Saying they like the privacy that cash preserves, the Swiss are among the diminishing numbers of people that like cash and larger bills. Bloomberg quoted one food truck owner who said he regularly provides change for 200-franc notes (US$200 ). At ATMs, the 200-franc note is slightly more than 10% of the cash people request.

Below, Swiss survey participants indicated the largest amount they paid in cash during the past 12 months: 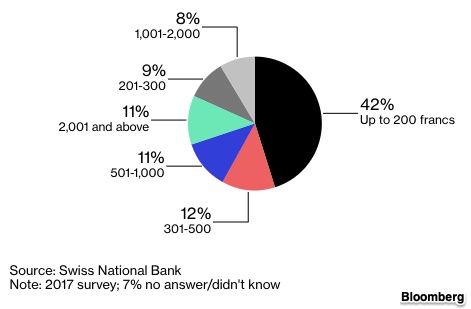 In their new currency series, Switzerland continues to issue unusually large bank notes. Today, a new 1,000 franc note began circulating while the 100 will follow after the summer. During the past three years, new 50-, 20-, 10- and 200-franc notes were issued.

In this video, the Swiss National Bank shows how they produce and distribute their newest cash. Called “The Many Facets of Switzerland,”  the new notes are made of a polymer and cotton sandwich with security images that can be seen only with ultraviolet light. When they travel to an ATM, the “shrink wrapped” stacks of notes resemble any other package. Do take a look:

The Swiss also have some of the largest notes. Their 1,000-franc banknote is worth somewhat less than Brunei’s and Singapore’s 10,000 dollar notes (worth approximately $7400). But the three are the most valuable in the world.

Our Bottom Line: Why Cash Matters

How we pay can influence how much we spend.

On a pain scale, paying with cash is the most distressing because we actually see the amount of money shrink. Not as transparent, checks and then debit and credit cards are next. But by far the least painless are those automatic bank account deductions that we might not even be aware of.

Since the Swiss keep a hefty amount of cash in their wallets for cash payments, are they more careful spenders?

My sources and more: Thanks to Bloomberg for reminding me that people still love their cash. Complementing the Swiss, this Federal Reserve Bank of Boston report told about cash in the U.S. But for the fun read, the Star-Telegram article on the Houston ATM glitch was the best.

Please note that most of Our Bottom Line was published in a past econlife post.