Our story starts during 2010 when Andreas Georgiou, a former IMF (International Monetary Fund) official, was brought in to overhaul the Greek statistics office.  Finding little that was accurate, he said Greece’s deficit was 15.4% of GDP, not 13.6%: 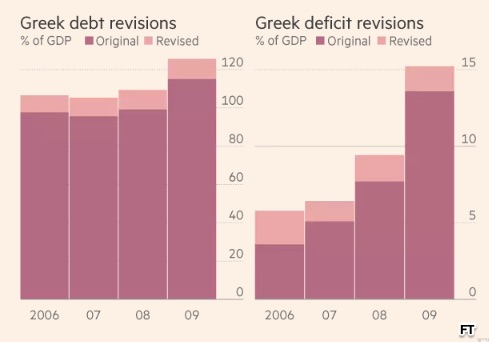 The Georgiou case is about much more than one man. Let’s take a look.

Dr. Georgiou’s new deficit numbers made a big difference. Before a bailout, the EU (European Union) wanted accurate statistics. When those numbers turned out to be far more problematic than Greece had indicated, the EU demanded gargantuan government spending cuts that meant slashing the government payroll and cutting pensions. One woman who attended Georgiou’s trial said, “This man helped to destroy our country and ruin my family.” Like her, many others lost their jobs and retirement money.

Now that the Greek economy has improved, its leaders say they no longer need help paying back the massive debt they accumulated. So the bailout ended on August 20, 2018. Greece claims it is ready to handle what it owes by itself.

The IMF is not so sure. Noting that growth had returned and the bailout gave “medium- term sustainability,” they expressed the following concerns:

The Wall Street Journal had a wonderful graphic that displayed the huge size and long duration of Greece’s debt. Looking at how much, when, and to whom, you can see why they needed a $375 billion lifeline. In 2019 alone, this is the debt that is due: 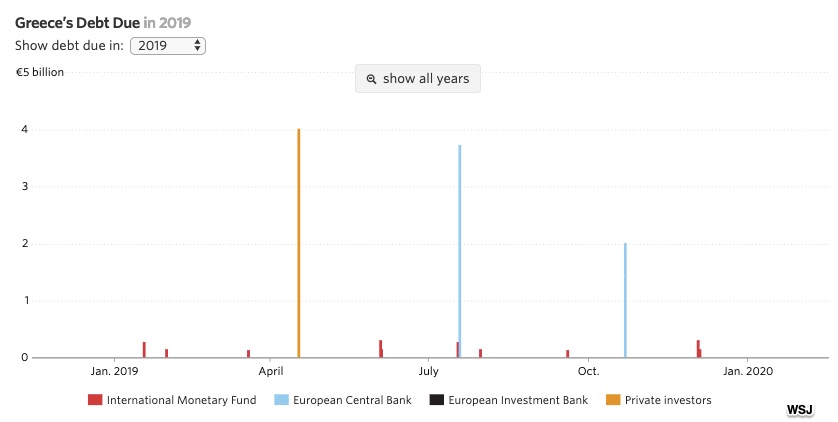 Below, 2042 is the last year the Greek government owes money to private investors. After that, the European Stability creditors remain:

With the bailout over and the debt less daunting, it should be politically palatable to drop the case against Andreas Georgiou. We await a final decision from their Supreme Court.

My sources and more: WSJ, here, here, and here had all of the current Greek bailout facts you could want while this FT article was a good complement for the history. Next, the NY Times had an overview of the IMF report and the World Bank told even more through its “Doing Business” statistics. Lastly, to meet Dr. Georgiou, I recommend “Greece’s Least Wanted Man Lives in Maryland.”

Please note that several sentences in today’s post were from last year’s post on Dr. Georgiou. Our featured image is from Pixabay.

The Best Way To Measure Happiness