A 2019 Update: The World’s Top and Bottom Laissez-Faire Countries

Laissez-faire remains in the news.

No, the headlines are not referring to it explicitly. But it’s there because we perpetually ask how much government should leave the economy alone or intervene. And our answers, as always, come from decisions about free trade, national spending, entitlement programs, taxes, and regulatory policy.

Thinking about laissez-faire took me to the Index of Economic Freedom. Through their heat maps, we can see which nations have the least government economic intervention and which have the most. We can also learn more about ranking criteria that range from bureaucracy and property rights to taxation and government spending.

But for now, let’s just see how countries’ economies are grouped. With green indicating those least fettered by government, here is the Index’s color scale:

For Europe, the “laissez-faire list” is led by Switzerland and Ireland with Ukraine at the bottom. The big change from last year is Estonia, with a move downward from #7 to #15. However, Finland did shift upward by 6 spots to #20 while Greece remains in the “mostly unfree” group: 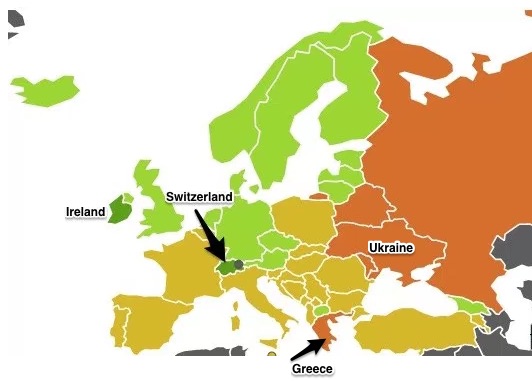 Asia and the Pacific (43 economies)

Hong Kong and Singapore are at the top for Asia and the Pacific (and indeed for the entire Index). As you surely expect, North Korea (#180) is last for the group and the Index:

One major change from 2018 was the U.S. move from #18 to #12. In Central and South America, the economy with the least government influence (and the only one that is shaded green) is Chile. At the other end, almost tied for the bottom, are Venezuela and Cuba. However, you can see by their color that Bolivia (#173) and Ecuador (#170) are ranked close to the least laissez-faire in the world. 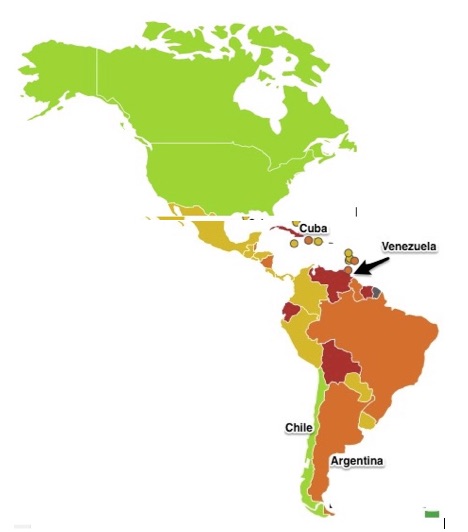 Sub-Saharan Africa just has Mauritius (tiny island dot) in green while Botswana still tops the list of “Moderately Free” economies. Grouped with  the “Repressed” nations, Zimbabwe, Republic of Congo, and Eritrea are in the same category as North Korea, Cuba and Venezuela. 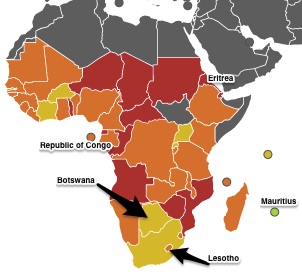 Adam Smith (1723-1790) presented one of the first pitches for laissez-faire.  Convinced that markets function best when government intervention is minimal, he believed no one could possibly know what is best for everyone. Instead, he said to let supply and demand determine the rules for production and distribution because when consumers and businesses freely interact, their countless incentives will create a “Wealth of Nations.” Then government just has to educate people and build roads, create a monetary system, oversee a legal system, and fund an army. For almost everything else, we can depend on the market system’s “invisible hand.”

My sources and more: For much more detail about the economies of 180 countries, The Index of Economic Freedom, though certainly biased, has a wealth of information. Not identical to the Index of Economic Freedom, the World Bank’s “Ease of Doing Business” tables also provide clues about where government is and is not burdensome. And finally, for much more about Adam Smith (1723-1790), econlib is always a good resource.

Please note that today’s econlife updates our 2014 and 2018 post, “The World’s Top and Bottom Laissez-Faire Countries.” Also, I apologize that my copy of the Americas map virtually eliminated Florida.

Our featured image is Adam Smith.

How to Deal With (Airplane Seat) Recline Rage