Assume you are going to a friend’s home for dinner. Having had no time to pick up a bottle of wine, instead you give your host $30.

You can express your appreciation for a dinner at someone’s home with flowers and wine but not money. California says any restaurant serving foie gras will be fined as much as $1000. We have wedding registries so givers can be sure their gift matches what the bride and groom want. The other way is cash that, in most cultures (but not all), is inappropriate.

So yes, there are certain things we are not supposed to pay for. And when we do, the transaction is regarded as “repugnant.” It is a transaction that some people do not want others to engage in.

In the U.S. selling a kidney is illegal. Considered a repugnant transaction, exchanging dollars for organs is called immoral by many people. They also worry about the poor being taken advantage of and commodifying a body part.

Kidney disease, however, is one of the top ten causes of death in the U.S. When someone needs a donor, the most likely possibility is a relative’s kidney but it might not match. And because people cannot sell them, the supply of kidneys among strangers is less than it might be.

WSJ recently told the story of a journalist whose brother needed a kidney. Although her own kidney did not match what he needed, she still could help him get one. The first step was giving her kidney to someone else.

This was the path of her kidney: 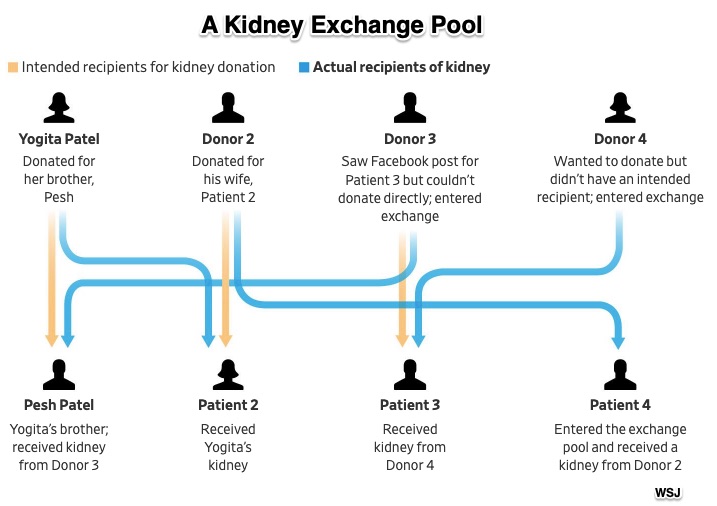 The idea of an exchange pool came from Alvin Roth. Hoping to help more donors and recipients find each other, he figured out how to bring them together. The key was to create kidney exchanges that are based on multiple pairs. With single pairs, Sue gives a kidney to Donna and Dave gives his to Sam. Moving to three pair and four pair exchanges, the complexities multiply but so too do the number of beneficiaries.

Repugnant transactions create a conflict between market efficiency and morality. So Dr. Roth figured out how a non-money market could become more efficient.  As he explains in his book, markets work best when they are “thick” and avoid congestion. They also need simple and safe rules. “Thick” markets have many participants. Non-congested markets avoid the gridlock created by too many participants. For example, a congested market could have 1000 farmers each selling wheat. Because grouping the wheat into categories minimizes decision-making, you would lessen the congestion. And finally, as much as Adam Smith promoted laissez-faire markets with minimal government interference, safety rules can be crucial.

Al Roth constructed matching algorithms through which non-money markets could be thick, non-congested, simple, and safe. He made it possible to diminish the inefficiencies created by avoiding repugnant transactions.

My sources and more: If you want to meet Alvin Roth and hear more about repugnant transactions, HiddenBrain is the perfect start. Then, the LA Times has more on California’s food prohibitions. But if you read just one article, do go to WSJ for Yogita Patel’s kidney story. Finally, if you have the time, Roth’s book was good.

Please note that several of today’s sentences were in a previous econlife post and our featured image is from Pixabay.

A 2019 Update: The World's Top and Bottom Laissez-Faire Countries

What Counting Cranes Can Tell You