We are told that Venezuela’s inflation rate for 2018 was 80,000%. Having started on November 13, 2016, their hyperinflation is one of the longest in history.

So yes, we know that prices are precipitously climbing, that wages have not kept up, and that production is way down. We know that excessive inflation creates poverty, corruption, and chaos. At econlife we’ve looked at the money and the human side,

Today, let’s try to grasp some of the numbers.

1. To understand hyperinflation, PPP can come in handy.

PPP (purchasing power parity) tells us how much two currencies can buy of the same item. It lets us compare purchasing power. Assume for example that a loaf of bread is 50,000 bolivars in October, 100,000 in November, and 200,000 in December. We just need to know that each of those bolivar prices could be converted to the same (hypothetical) dollar amount–maybe $1. You can see that you need lots more bolivars but the same dollar for your loaf of bread.

2. It helps also to know the minimum wage.

Agonizing over the price of eggs, one Venezuelan said they cost 2,800 bolivars last month and 9,800 this month. At the same time, a loaf of bread had been 645 bolivars several weeks ago and now is 1,600 bolivars. That means if you earn the minimum wage–34,000 bolivars a month–you need approximately a third of it for your breakfast.

3. Perhaps though price stickers say the most.

Stuck in the middle of all of this, shopkeepers have price tags to think about. They have to decide how frequently to change prices. The decision involves the expense of switching and the cost of a delay. Whatever they do, their customers will rush in to beat an increase if they know when the change is scheduled.

4. The number to remember for hyperinflation is 50%.

If, during 30 consecutive days, prices rise by more than 50%, you have hyperinflation. Furthermore, when the increase stops for a month or two and then begins again (within a year), you are in the midst of the same hyperinflation.

Although the IMF has said Venezuela’s hyperinflation will equal 2,500,000%, the experts say it just cannot be predicted. The politics, the distortions, and the rapid up and down changes make its trajectory unknowable.

6. You cannot tether an out-of-control currency.

Venezuela has tried raising the minimum wage, printing more money, and price controls–all to control the upward march of prices. None of it worked. The alternative is dump and replace. You dump your currency and replace it with the dollar.

While we could name many reasons that Venezuela’s production has evaporated, hyperinflation is certainly one of them. 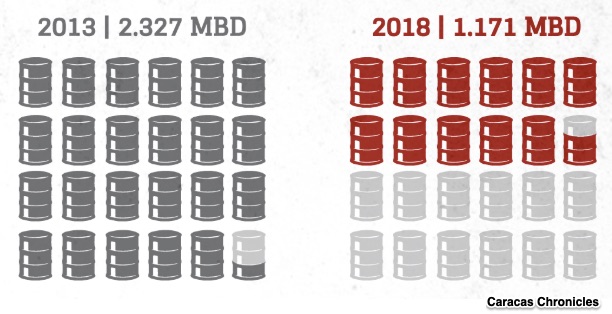 Overall production in Venezuela is also down by almost half since 2013:

Finally, they could be doing so much more. How much Venezuela is using its productive capability is said to be down to 24% of what it could be:

Perhaps though it all adds up to a worthless currency that returns us to PPP as a key yardstick of Venezuela’s tragic plight.

My sources and more: During one very pleasant walk (after temperatures rose to 50 degrees from 5 degrees), I listened to a More or Less discussion of Venezuela’s hyperinflation. Always though when reading about Venezuela, I recommend the Caracas Chronicles blog for a Venezuelan perspective. Then, finally, and crucially, I check what hyperinflation expert Johns Hopkins Professor Steve Hanke is saying.

The Beer Ads That Started the Corn Syrup War