Last Friday, Venezuelans again raced to the stores that were open. After their president announced yet another cure for a very sick economy, people reputedly tried to buy anything and everything that was available.

The Venezuelan economy is setting records. Beyond 48,000%, their yearly inflation rate is the highest Latin America has ever seen. At the same time, having halved during the past five years, production is shrinking. The result is food shortages, electrical outages, and depleted medical supplies.

Responding to the crisis, the government replaced the bolivar with the bolivar fuerte that yesterday was replaced by the bolivar soberano. Each switch was supposed to deal with hyperinflation. The first had a larger denomination bill while the second lopped five zeros off the currency. In addition, they are raising the minimum wage and cutting the fuel subsidy.

With a minimum wage that is up 60-fold, layoffs have accelerated. One business owner said that since December, he reduced a seven person staff to four. Yet still he wonders how he can possibly manage a 180 million bolivar (now 1800) minimum wage. Responding, President Maduro said he would cover the private sector’s extra expense for three months and eliminate the federal deficit.

We can only imagine the “tsunami of bolivars”  that Maduro will need to pay the private sector’s payrolls. We can also predict a ballooning money supply that further perpetuates higher prices. Then, adding to the chaos, they have banks closing, banks making currency readjustments, and debit cards and point of sale transactions that don’t work.

Johns Hopkins professor Steve Hanke wants us to be precise when we say Venezuela is experiencing hyperinflation. Because reputable sources use the term too loosely, he suggests that we adhere to three criteria:

You can see how prices have skyrocketed: 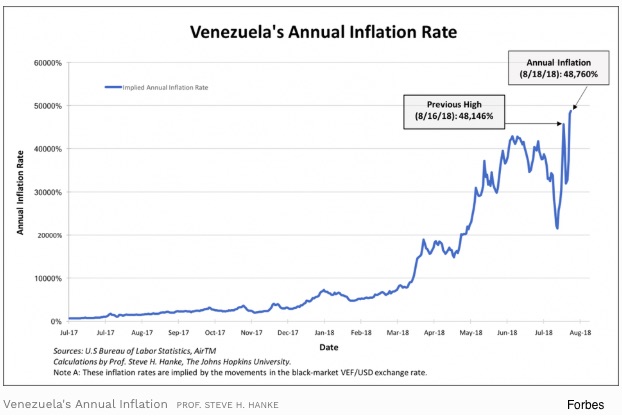 Perhaps though this Guardian graphic expresses it all: 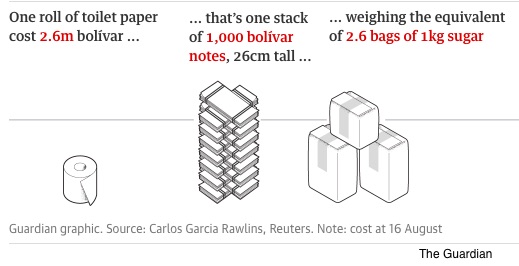 When you are dealing with hyperinflation, erasing zeros is never a solution. In a Forbes article, Dr. Hanke tells how Hungary, through a series of policy reforms, erased 29 zeros from its currency. And still it could not constrain daily price increases that touched 207% in 1946.

To eliminate hyperinflation, a country needs an entirely new monetary regime. One possibility is another currency like the dollar. The goal is to achieve some balance between the money supply and production.

So, returning to where we started, we have Venezuelans racing to the stores. The result is a hyperinflation with too many bolivars chasing too few goods and services.

My sources and more: Articles abound on the Venezuelan economy. While they quote a variety of conflicting statistics, all indicate the magnitude of the crisis. FT focuses on a policy narrative, the NY Times on currency devaluation, and The Guardian explains hyperinflation. Then for a dose of reality, the “Caracas Chronicles,” here, and here, has what people are saying. But if you read just one article, do go to what Steve Hanke says in Forbes. It conveys the ideal mixture of history, analysis, and Venezuela’s plight.

Why Aretha Franklin Should Have Earned More From "Respect"