According to the Caracas Chronicles, that new note will buy you a package of 30 eggs. Combine several of those eggs with tomatoes, onions and peppers and you have a meal that could cost 210,000 bolivars–far more than a month’s pay at the country’s minimum wage.

And that was at the beginning of December. Soon those prices will probably rise.

How Inflation Disrupts Our Lives

At the end of October, Venezuela’s annual inflation rate was 2800%: 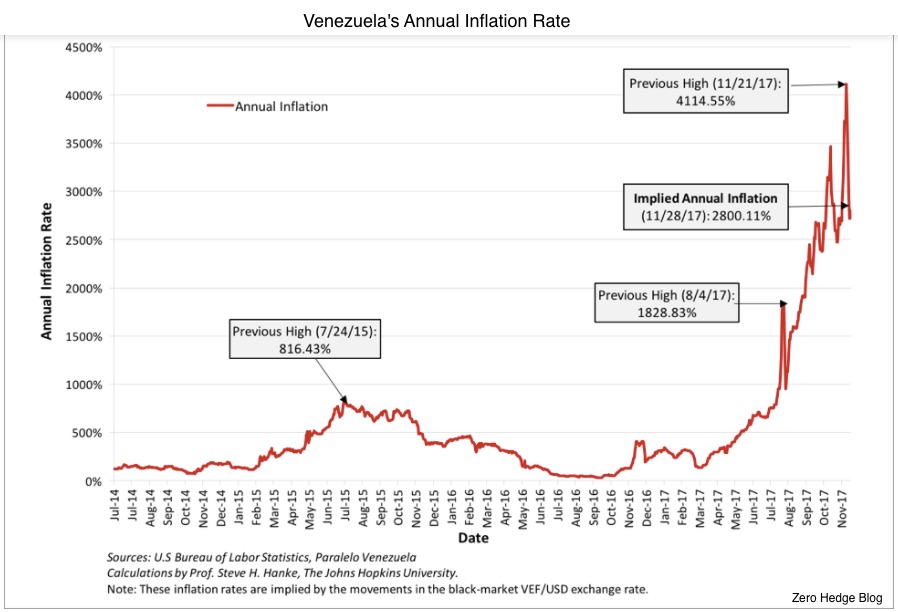 The result is a new kind of daily existence.

Your life becomes filled with ballooning transaction costs (the time and energy needed to accomplish something). You wait  for 2 1/2 hours to get a canister of cooking gas but they run out before your turn. Then, you go to the ATM to another line. There, the most you can withdraw is the equivalent of $1. But you need cash because merchants would not accept any “plastic” form of future payment.

Meanwhile, at work, wage increases have not kept up with inflation. In July President Maduro raised the minimum wage by 60%. Combined with a food ticket, the value was close to 200,000 bolivars. But the cost of living is far higher. Unable to afford three meals a day, an average Venezuelan lost close to 20 pounds in 2016.

Below you can see why: 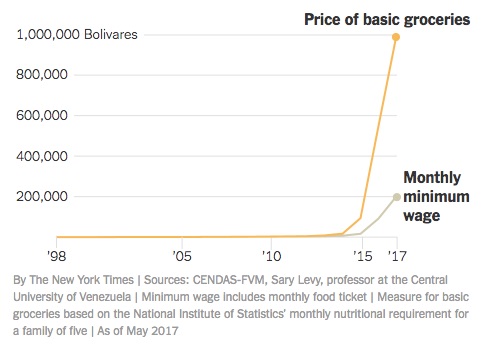 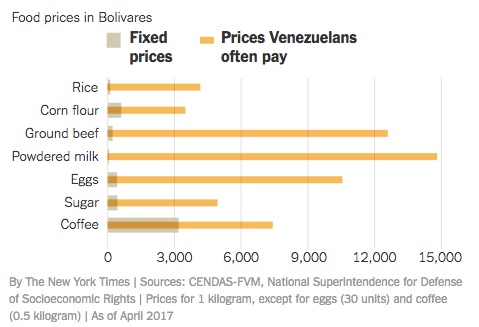 Our facts are a very small part of a larger story. But their purpose is to show some of the havoc in a country that is on the brink of hyperinflation.

On December 3, 2016, Venezuela experienced the world’s 57th hyperinflation. Now, a year later, it might be returning.

To be defined as hyperinflation, the rate increase needs to remain at 50% for at least 30 consecutive days.

So where are we? Let’s conclude with one other anomaly. Venezuela’s 100,000 bolivar note looks just like its 100 bolivar note except for the color and a few small details. In our featured image, you can see it has the 100 on the front–not 100,000. Perhaps, having wound up with a huge quantity of 100s that had become worthless, they are “recycling” them?

My sources and more: When figuring out anything about hyperinflation, economist Steve Hanke’s blog is the perfect place to start. From there, it was fascinating to see real stories from Venezuela at Caracas Chronicles and KonZapata. Then the NY Times  completed the picture with some of the most up-to-date coverage here and here, as did Reuters.

Why We Have a Christmas Tree Shortage

The Travels of a Cashew