Deciding If Lab-Made Meat Can Be Called Meat

Missouri has a new law. To be labeled meat, your product has to have come from a cow, a chicken, or some other creature that has two or four legs. The goal was to protect the state’s ranchers and poultry producers.

It all began during the summer of 1978. In a tent near the Nolichucky River, Seth Tibbott whipped up his first batch of tempeh. Made from soybeans and spores, the meal reputedly tasted amazing.

From there, his tempeh evolved into faux turkey “drummettes” and yes, Tofurky. Sales soared with the introduction of “Tofurky Jurky” and a holiday meal box. By 2017, the Oregon-based company had sold almost five million roasts.

Tofurky asked a federal judge to block enforcement of the new Missouri labeling law. They want the courts to decide if the legislation violates their freedom of speech. Last week, the media said the case was settled but the details are still being worked out.

I suspect the new Missouri law would have had a problem with chick’n on the Tofurky label: 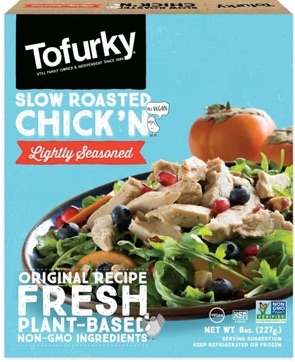 Impossible Foods makes plant-based burgers that use the heme molecule to get real meat flavor. Finless Foods is developing faux fish from stem cells. SuperMeat is creating chicken “without growing a single animal.” And we have Tofurky.

The question for regulators is the label.

On December 20, 2018, the 9th Circuit said that a “reasonable consumer” knew the difference between almond milk and cow’s milk. It was not imitation milk. It was a different product. Producers of almond milk products would not have to change their labels.

Will the courts have the same opinion for lab-made meat?

My sources and more: The St Louis Post-Dispatch and the Courier Tribune had a good summary of the new Missouri law and the recent court decision. Meanwhile, my Tofurky history came from the New Yorker. The almond milk case was described by Bloomberg Law. Finally, explaining most of this, a Freakonomics podcast looked at meat innovation.

As you surely knew, our featured image is Tofurky.