What Makes a Dressing French?

According to Julia Child and James Beard, a real French Dressing should be a sauce vinaigrette–not a gooey orange mixture: 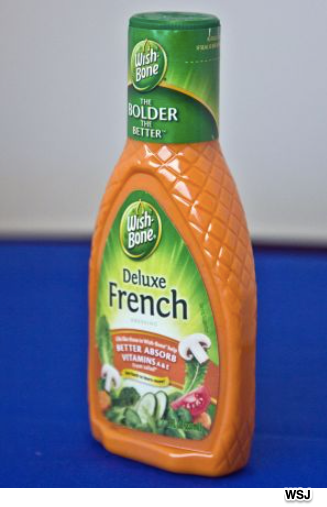 Maybe, after 72 years, it will become what it should be.

Our story starts in 1950 when the U.S. government identified just three salad dressings. There was Mayonnaise, “salad dressing,” and French dressing. According to U.S. regulators, to be called French dressing, a mixture had to include vinegar and/or lemon or lime juice, and vegetable oil. You could also add some sugar, salt, tomato paste or paprika.

Meanwhile, since 1998, the Association for Dressings and Sauces has not been pleased. Assuming that consumers wanted a different kind of French dressing, they asked the FDA to let them change the recipe. After all, as they pointed out, the manufacturers of Ranch Dressing and Thousand Island had much more freedom. Finally the FDA agreed, saying that its standard “no longer promotes honesty and fair dealing in the interest of consumers.”

So, we no longer have a “Standard of identity” for French dressing.

Another Taste of Food Regulation

The French Dressing story reminded us of our peanut butter post from 2017. At the time, we told about Ruth Desmond, her food letter, and the FDA hearings she attended. Concerned about peanut butter labels, she said to General Foods’ attorneys that peanut butter with less than 95% peanuts should be called “peanut spread” or “cold cream.”

Peanut butter attracted Ms. Desmond’s attention after Procter & Gamble’s Jif was introduced. More appealing to the palate than Skippy and Peter Pan, Jif had fewer peanuts and more oils. While Jif was 75% peanuts, the leading brands were closer to 90%. Add to that, Jif’s “Crisco base” of hydrogenated oils and, according to Mrs. Desmond, you get cold cream, not peanut butter.

The FDA decided that peanut butter had to be 90% peanuts.

French Dressing and peanut butter consistency take us to the up- and downsides of standardization. Looking back to 18th century France, you can see why the market needs standardization. The size of a pint could have varied by 20% between villages. And that was just one metric. Imagine dealing with many when buying and selling merchandise.

Today in the U.S., NIST (National Institute of Standards and Technology) is the place to go for a measurement standard. Whether you want to know the duration of a second, the length of an inch, or the standard chemical properties for peanut butter (#2387), NIST has it.

Still, looking at French Dressing and peanut butter, we can ask when standardization can be too narrow.

My sources and more: WSJ and the NY Times had the French Dressing story. (Please note that sections from today were published in past econlife posts.)

How to Win a Baguette War

When a Starbucks Custom Drink Is Excessive